Sigourney Weaver on GHOSTBUSTERS 3, Did She Reveal Spoliers?

In an interview with Sigourney Weaver, Channel 4 News in the UK was able to get some details about GHOSTBUSTERS 3, which “is happening.” 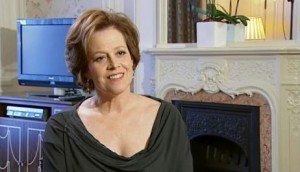 Sigourney says about GHOSTBUSTERS 3, “I’m afraid that it is happening. I hope people are excited about that. I don’t know if I’m going to be in it, I’ve gotten a couple of calls, ‘would you read the script?’ I know that my little son Oscar, you know, who was almost kidnapped from me. He was kidnapped from me. I think he’s grown up to be a Ghostbuster… Well, I might be in it. I see nothing wrong with being in it. I don’t think I’ll have a big part in it. I think Bill Murray has a little more to do with it… he might be a ghost.”