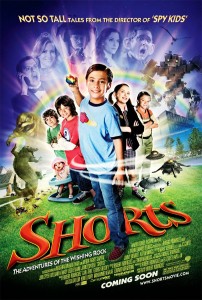 The starts of this movie are, as you can tell in the title, a bunch of “shorts.” With this film, Robert Rodriguez has made the kids version of his buddy Quentin Tarantino’s “Pulp Fiction.”

Shorts made the process more technical with fast forward, rewind, and pause buttons. The back and forth cutting doesn’t change the fact we have all seen these wish stories. This family adventure film is nothing we haven’t seen before this time the kids found a wishing rock. This is the same as lamps or any other wishing device the trouble comes when they cannot control what they wish for.

The Narrator, main character is Toe Thompson (Jimmy Bennett), a kid that has been bullied but still confident kid who loves his braces, and keeps them spotless. The bullies are led by Helvetica Black (Jolie Vanier), who always has a permanent scowl. Thompson has some friends Loogie (Trevor Gagnon), boy who is always giving out the wisdom he has gained in his short life. 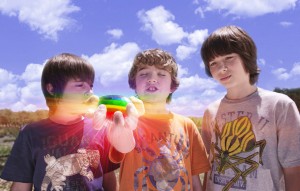 The gang lives in a neighborhood called Black Falls, named after the corporation Black Box (an IPod that transforms into everything). Mr. Black (James Spader) runs Black Box. All the adults in Black Falls work for Mr. Black and he is a tyrant at work. At one point in the move I couldn’t tell you which short it was you pick 1 through 5 that are all mixed up, he threatens the workers if they did not complete their task they and their family’s would be out of Black Falls.

Shorts have some star power like James Spader. Leslie Mann (Funny People) and Jon Cryer (Two and a Half Men) play Thompsons parents who are in fear of losing their jobs. William H Macy plays and inventor who is afraid of germs, and has made his house somewhat of a bubble where he and his son never leave.
Throughout the movie almost every main character gets their hand on the multi colored wishing rock. The only problem is no one figures out the best way to use it. The Adults have more problems with the Rock than the kids do.

“Shorts” does have better CGI Graphics than Gi Joe did, but the story line is almost as bad or worse. The 89 minute movie did keep my 5 year olds attention, but I wanted to wish for one wish and that would be for the movie to be over. As I have done in the past when reviewing a kid’s movie I try to get the kids perspective and the adults.

Kids at least my child did sit through the movie which is a plus. She was also able to tell me a little about the Movie her favorite part being the Giant Bugger. For Kids 5 – 11 I would say this movie would grade out to a B-. It might be somewhat hard for the kids to follow from the jumping forward and back, but they will unfortunately enjoy it.

I say unfortunately because anyone over the age of 14 will probably not like it. My Adult score would be a D. I hated this movie, did not like this movie at all. I even sat there half way through the movie watching some of the other press people leave wishing I had a wishing rock to get out of the flick. If your child wants to go see this movie send him or her with a baby sitter. They might charge you extra after they sit through it, but at least you did not have to watch it!