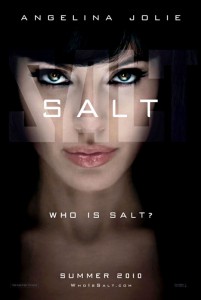 The Simpsons’ spot-on Behind the Music parody contains one of my favorite lines in the history of the show. As they’re going to commercial the narrator solemnly intones, “The dream was over. Coming up: Was the dream really over? Yes it was. Or was it?” That, in a nutshell, describes Angelina Jolie’s new vehicle Salt. Not the topic so much as the back-and-forth. Jolie plays Evelyn Salt, a C.I.A. operative charged with being a Russian spy (yeah, Russian…go figure). The accusation, leveled by a defecting Russian spy no less, is that she was taken at birth from her Soviet chess master parents and then, after a lifetime of being trained as a killing machine, inserted into American society and tasked with infiltrating our government. The allegation causes Salt to flee, ostensibly because she fears for her husband’s (August Diehl) safety, which only results in her appearing all the more guilty. As Salt goes on the lam (yum, salted lamb) it quickly becomes evident that, whether she is making an IED out of a fire extinguisher and household chemicals or navigating the New York City sewer system with ease of teenage mutant ninja turtle, she’s clearly been trained for something greater than your everyday espionage…but by who?

The film was originally intended for Tom Cruise and it shows for both good and ill. In fact, the movie is similar in many ways to a more somber version of Cruise’s most recent outing Knight & Day. Both feature high-octane action sequences that are staged remarkably well and have plots that revolve around an agent who may (or may not) have gone rogue. However, where Cruise’s picture played things lightheartedly, Jolie’s version, to its detriment, is deadly serious. The film’s efforts to keep us guessing in regards to Salt’s true nature rob us of the ability to root for someone thereby draining the action of any sense of urgency. Things are made all the more the maddening by the fact that Salt’s intentions are never quite the mystery that the filmmakers seem to think it is. Sadly, it could have been. While Hollywood doesn’t make big-budget action movies where the A-list star turns out to be the villain, Jolie is exactly the sort of star who would buck that trend. It’s a dichotomy that’s ripe for exploitation and missed opportunity.

Director Phillip Noyce, who has helmed high profile Hollywood fare like Patriot Games as well as more politically minded movies such as Rabbit-Proof Fence, handles both halves of the film skillfully. However, it’s Kurt Wimmer’s screenplay that ultimately disappoints. Wimmer wrote Law Abiding Citizen which, if you’ve seen it, is probably all you need to know; though where Law Abiding Citizen was ludicrous, Salt manages to be merely implausible. Of course, implausibility isn’t that great of a sin in the world of action films. The problem is with just exactly where the implausibility lies. It resides not with the action set-pieces, but with the political thriller aspects of the movie. As Salt’s objectives and motivations continue to double-back on themselves, the film reaches increasing levels absurdity until eventually we’re treated to the site of her infiltrating the highest levels of government disguised as a male soldier; her sexiness forever damaged upon discovering that Jolie as a drag king looks frighteningly like a young Ralph Macchio.

Salt desperately wants to be the female-empowerment equivalent of Jason Bourne; James Bond by way of Camille Paglia. And it succeeds to a degree. But Jolie’s performance is, as is so often the case, humorless. For all the swirling kineticism, she doesn’t seem to be having much fun. It delivers on its promise of action and manages to hold your interest throughout, but ultimately it’s hampered by its ill-conceived and ineffectual sense of mystery.