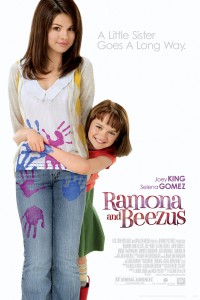 Based on a popular series of children’s books, Ramona and Beezus stars Joey King and Selena Gomez, respectively, in the title roles. Ramona is an excitable 3rd grader whose energy is exceeded only by her imagination. A tendency to get lost within her own flights of fancy combined with an accident-prone nature makes her quite the handful. Ramona spills paint on cars, crashes through the attic floor and almost burns the house down trying to make dinner. Oh, you wacky Ramona.

The film’s plot, what there is of it, revolves around the kids’ father (John Corbett) losing his job. It’s a rather dismal plot point, especially given the state of our current economy, but perhaps it might be a good way for the unaffected to learn and those who are affected to see that they’re not alone. However, seeing kids faced with the prospect of maxed out credit cards, broken-down minivans and impending foreclosure can be a bit disconcerting. And just when you think the movie can’t get any more depressing…(SPOILER ALERT)…their cat dies. Keep in mind, this isn’t an art-house film striving for gritty realism. It’s a kid’s movie with a light and airy tone…that just happens to feature a cat burial.

The film is at its best when Ramona drifts off into her lands of make-believe. The vignettes have an almost buoyant quality; worlds appear to be created out of construction paper and glitter glue in just the sort of way a 3rd grade girl would create them. Sadly, the vignettes are few and far between. While they are featured prominently in the trailer (see below), they constitute probably less than 5% of the actual film.

King is endearing and more than capable at her young age of carrying a film such as this, and she develops a nice rapport with Gomez. But the schism between topics and tone is a wide one. It manages to be cute in spots but never quite musters the laughs or the charm that it sets out to. While fans of the original series may enjoy the sight of the books being brought to life, the uninitiated will most likely be put off by its contradictory nature.