I think it’s safe to say that for the finale of the series with the Phillies, the Cardinals went out with a whimper. The Cardinals managed one hit and two walks in 11 innings yesterday while losing 2-0 to the Phillies. Tip your cap to Cole Hamels; he simply was on. Adam Wainwright was effective but inefficient, pitching six shutout innings but requiring almost 100 pitches to do so. Still, he recorded yet another quality start and lowered his overall ERA to 1.94.

Thus ended an eight-game winning streak that saw the Cardinals lap the Reds and take control of the Central by a game and a half. They take on the Cubs this weekend.

Now onto the issue that people appear to be getting excited about. 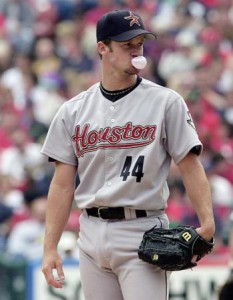 Roy Oswalt, doing what the Astros do best: blowing. I'm not sure this caption will make it through the censors.

Reports are indicating that the Cardinals are front-runners in the race to get Roy Oswalt from the Houston Astros. According to sources close to Roy, he would prefer the Cardinals over the Phillies and would even possibly concede some of his demands, namely the option for 2012. With 8 days to go before the non-waiver trade deadline (players can still be traded up until August 31, but they have to pass through waivers first), everyone in St. Louis appears to be taking sides, much like last season with Matt Holliday.

Oswalt would be a great addition; the problem is, we can’t afford him.

If the Cardinals trade for him, Oswalt would be a terrific addition. He’d be under contract for at least one more year after this, and possibly 2012. He’s a front-end starter who’s won 20 games twice and has a career ERA of 3.22. He’s pitched in the post-season as well and has gone 4-0 with a 3.66 ERA in eight games. Just imagine a starting rotation with Wainwright, Carpenter, Garcia, and Oswalt. Absurd.

The Cardinals play in a small baseball market. Certainly we have devoted fans. But not every one of them can pony up a large amount of cash to go to every game. As a result, our payroll is going to be at or below the $100 million mark next year.

Now, look at the current contract situation for the following Cardinals for next year.

* – estimate based on total contract and length of contract

Now, that’s roughly $75.7 million for eight players. That leaves about $24 million for 17 more guys. Albert Pujols may or may not get a new contract this offseason as well; if he does, expect him to get paid roughly $28-30 million a year. Otherwise after next year, he’ll be able to walk away. Adding Oswalt’s contract of $16 million next year…well, do the math. Unless the Cardinals owners decided to pony up more money per season, there will be a serious numbers crunch come next year and in the immediate future.

On top of the monetary terms, the Cardinals are expected to give up Shelby Miller, a starting pitcher drafted in the first round last year. Miller’s one of the first high-end pitchers the Cardinals have drafted in a long time. He struggled a bit this year but has come on as of late and was selected to pitch in the Futures Game. Other than Garcia (you could sorta throw Wainwright in there, even though the Braves drafted him), the Cardinals have struggled to develop homegrown pitching talent. Miller is expected to help buck that trend and would be under the team’s control for several years.

If the Cardinals end up making the trade for Oswalt, it won’t be the end of the world. He’ll help them contend this year and next. But at what price?