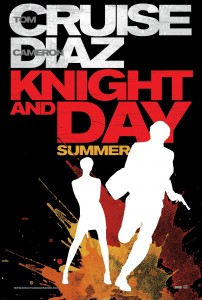 Tom Cruise, hoping to springboard off of the goodwill engendered by his Tropic Thunder cameo as Les Grossman, returns to the big screen with the sort of film that had previously been his specialty: a bloated, big-budget, bombastic action flick. It’s been four years since Mission: Impossible III misfired; a misfire, it should be noted, due largely to his increasingly erratic behavior. Whether it was jumping on couches or informing all of America that psychiatry had been invented by the Nazis, Cruise suddenly went from Hollywood It-Boy to late-night talk show punching bag…and lost his box office clout in the process. Now, anyone with a cursory knowledge of Newton’s Laws of Motion (and that should be all of us, right?) and/or NASCAR (that should be the rest of us) can tell you that if your car has gone into a spin the only way to regain control is to turn into the skid. This is exactly what Cruise does in his new film Knight & Day.

Cruise plays Roy Miller, a rogue C.I.A operative who is in possession of a device called “The Zephyr” – a pocket-sized MacGuffin that offers a perpetual energy source. He may or may not have the best of intentions for the device but what this secret agent does have is mad skills, a sunny disposition, energy to burn and crazy-eyes. Miller, while on the run, meets June (Cameron Diaz) in an airport. There’s an instant connection and, when she’s accidentally ensnared in his own danger, he decides to save/court her. From here, the film is basically ninety minutes of run-and-gun.

The film is a low concept/high energy runaway train. While June is trapped in a poor-man’s North by Northwest Miller is smooth-talking his way through his own private Spy vs. Spy strip. The brilliance (though that might be overstating things a bit) is in how much of the action takes place off-screen or in the periphery. Remnants of dramatic exploits float around the margins like footnotes. And it’s these remnants (along with Cruise’s charisma) that give the film much of its charm. While it would seem counterintuitive, by implying rather than showing much of the action, the film’s excitement level is actually heightened. But make no mistake; this is a big budget movie. The filmmakers didn’t take this approach in order to hide a lack of funding. There’s plenty of spectacle on display.

But the highlight of the film is without a doubt Tom Cruise himself. Personally I’ve always been rather indifferent to him as an actor. I didn’t love him at his zenith nor did I hate him at his nadir. In Knight & Day he confronts his newfound public persona head-on. This guy (both the actor and the character) is a wild-eyed, head-full-of-crazy and surprisingly…it’s endearing. It’s almost as if Cruise has found his fall from (public opinion) grace liberating. He’s a giddy mass of frenzied weirdness and, more importantly, charming. Cruise is doing something we haven’t seen him do on-screen in a long time…have fun. (Sure, he was having fun in Tropic ThunderI I suppose but he was so buried beneath latex and make-up that we didn’t really see him having that fun.) For the first time in a long time Cruise reminds us just why he’s a movie star. The real question is: will anyone show up to find out?