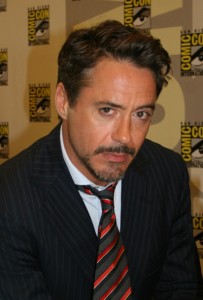 After much due-diligence, bloody-disgusting.com has confirmed that Robert Downey Jr. is indeed being closely considered for the role of Lestat, in the reboot of Anne Rice’s “Vampire Chronicles” series.

The first and best known film from the series of novels is “Interview With A Vampire,” where Tom Cruise plays Lestat alongside vampires played by Brad Pitt and a young Kirsten Dunst. If you haven’t seen that movie, it is a must see – so check it out! It would only be natural to assume that because of the success of Stephenie Meyer’s Twilight series, vampire flicks are getting the chance to make a comeback. And you are right to do so – the franchise is making mega-bucks, and all of the studios want a piece of the action while it’s hot.

Lestat appears as a major character in both motion picture adaptations of The Vampire Chronicles novels. In Neil Jordan’s 1994 film adaptation of Interview with the Vampire, he is portrayed by Tom Cruise. In the 2002 film adaptation of Queen of the Damned, he is played by Stuart Townsend.

The Vampire Chronicles is a series of novels by Anne Rice that revolves around the fictional character Lestat de Lioncourt, a French nobleman made into a vampire in the 18th century.

Do you think Robert Downey Jr. will make a good vampire? Let us know by leaving a comment below!