Up in the Air

Like all of Jason Reitman’s films thus far, “Up In The Air” deals with complex characters and intriguing situations that are beyond the average scope of films seen today. Over the past four years, Reitman has brought to the silver screen main characters like a big tobacco lobbyist, a pregnant teenager, and now a man who flies around the country firing people. The secret to his success is in the challenge of making these characters believable, and it pays off once again in his latest film.

Ryan Bingham (George Clooney) is a professional liaison between downsizing companies and employees that they can no longer afford to keep employed. It is his job to fly around the country, from business to business, only to feel at home when he is up in the clouds. One of Bingham’s driving forces is his personal goal to be amongst an elite club of only six others to have earned ten million American Airlines frequent flyer miles. Upon the cusp of achievement, his dream is at challenged by new employee Natalie Keener (Anna Kendrick) who comes to his company fresh out of graduate school. She develops a method to allow their company to become more efficient, which threatens Bingham’s very way of life.

Throughout the film, Clooney is accompanied by two leading ladies. Beside from Kendrick, who’s character is made to go on the road with Clooney’s to learn about real human interaction, we focus on another traveler played by Vera Farmiga. Alex Goran is the closest thing to a female equivalent of Ryan Bingham, and therefore they make a connection in more ways than one as they cross paths. George Clooney gives a performance that is as charismatic as ever in the film. His charm carries the story from scene to scene, whether he is laying someone off or giving an inspirational seminar. Even though he is performing a job that should be so unlikable, it is hard to wield any ill-will towards his character. Vera Farmiga really takes over as the leading actress throughout the film. Her charm and on-screen presence is as contagious as Clooney’s, and makes you want to learn more about her character. Anna Kendrick does a sufficient job playing the antagonist to Clooney’s Bingham, but appears juvenile beyond acceptable means at certain points. But aside from some minor parts, it is hard to find faults with acting in the film.

The film keeps an exceptional pace from beginning to end, as it intrigues its audience with characters and subject matter that has not been approached previously on-screen . With the current economy and job crisis being experienced during the release of the film, it is something to be said that the film never approaches the subject in an inappropriate way. There are actually scenes in the film where the characters that are being fired are actual people that are unemployed. Their true to life experiences and emotions that are captured on film add another layer of realism and interest. Traveling from city to city with the characters in the film is truly a delightful 109 minute trip.

UP IN THE AIR is an A+
(I was able to sit down with Jason Reitman and talk to him about the film, which was filmed partly in St. Louis. Watch the interview here.)

Another view from Zac:

Up in the Air is a painfully honest film that not only looks into the lives of our three main leads but will cause a number of viewers to reflect back on their own in these troubling times.

Jason Reitman adapts the novel by Walter Kim into a funny and sad tale that takes us all across the country and into the life, or lack there of, of Ryan Bingham; played wonderfully by George Clooney.  Bingham’s home is the airport, or should we say, airports.  Living his life almost literally in the skies as he flies from company to company around the country as he is hired to come in and make employees redundant.  This job has made him numb to the world and unable to make any real connections to just about anyone.  Bingham even gives seminars about how to detach yourself from the things that hold you back and possess you instead of possessing them.  We see him doing his job, which he does well, and the company he works for sells their business as helping these employees look toward their future and helping them cope with this traumatic moment in their life.

Bingham’s world is put into jeopardy when a young gun, Natalie, with the company plans to revolutionize this niche industry with web based meetings when they fire these unfortunate employees.  To make things worse, Bingham is forced to take Natalie along the road to train her a bit and the two set out to downsize a number of companies across the country.

Natalie is played wonderfully by Anna Kendrick and has burst out on to the scene as a young actress to be reckoned with.  She had shown some good work with Rocket Science and she is always going to be known for her work in Twilight, but this will be looked at as her coming out party.  She is funny, kind of a tight ass, and does a fantastic job at capturing a young women’s life view.  She also is marvelous as her idealized view of the world slowly crumbles and her melt down half way through the film is a highlight of the picture.

Vera Farmiga is wonderful as well as a love interest, if we can call it that, of Bingham who gets off on traveling, miles, and executive class clubs offered at hotels, rental companies, airlines, and airports.  Her chemistry with Clooney is fantastic and you can’t help but be lit up by her appearance when she crosses paths with Bingham along their travels.

George Clooney delivers one of his finer performances of his career as the seemingly closed off Bingham.  At first Clooney charisma is honorable through the tough job he has to perform, his charm and wit are as sharp as ever, and he is incredibly likeable even though he has detached himself from relationships.  Clooney really shines as Bingham when he has to adjust to his changing world around him and he slowly realizes his life might not be what he wants any more.

The rest of the cast is rounded out by a strong ensemble full of comedy vets,  Most are regulated to a scene or two, with Bateman and McBride getting the most screen time out of these guys.  What’s interesting about these guys is that they are notorious improvisers but neither of them really gets to showcase that at all and still remain very good in their respective roles; which is a good thing.  Melanie Lynskey and Amy Morton also contribute fine work as Bingham’s sisters who show up at the later character’s wedding.

Reitman deserves a lot of credit as well for writing a solid script with Sheldon Turner and never giving into Hollywood moments.  There isn’t one non-genuine moment in this film and that is a testament to Reitman’s vision which isn’t afraid to challenge the audience and not make it easy for them.

The film’s themes also really resonate with today, surrounding the need for change in our lives, the loss of jobs, and the horrible position it is presenting for so many Americans today.  The film tackles the topics straight forwardly and captures the sadness and humor in the situation while still somehow inspiring some hope in a situation that seems hopeless.

In the end, Up in the Air is sweet, humorous, and topical for today’s social climate.  Love is failing, jobs are disappearing, and our stars perfectly capture these emotions and the way they affect society.  Reitman’s craft gets better with every film out and he continues to make the case as the best young director working today, now three for three with Thank You For Smoking, Juno, and Up in the Air.  The performances from the three leads are quite great and Clooney gives one of his better turns in his career.  Up in the Air will challenge your emotions and will not conform to what you are expecting and is a breath of fresh air for Hollywood produced drama.

Up in the Air is an A 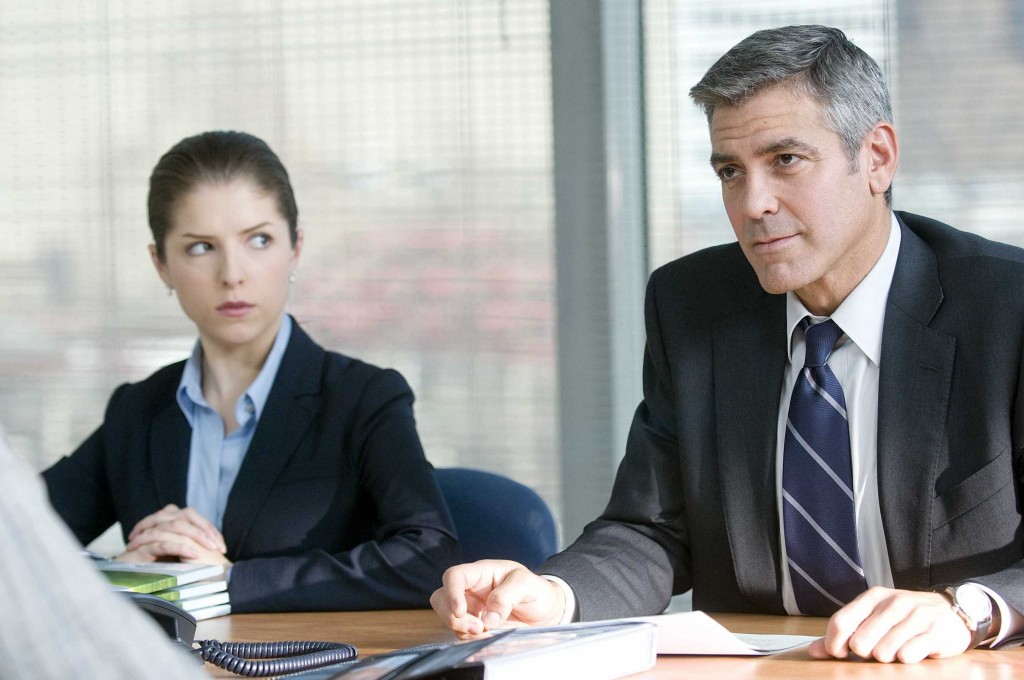