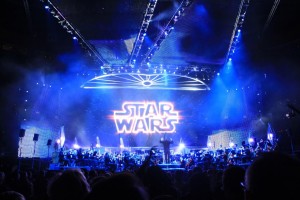 The show features the amazing music that was composed for the six Star Wars films by John Williams. The music is played by a live symphony orchestra, while footage edited from all six films plays on a gigantic screen in the background.

A must see show for Star Wars fans and film lovers alike!