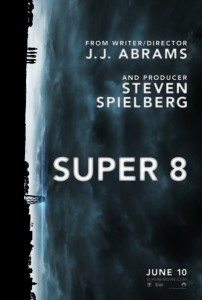 J.J. Abrams (the man who brought you Lost) and Steven Spielberg (the man who brought you your childhood) team up for Super 8. Shrouded in great secrecy until just a few weeks before its release, the film is set in 1979 and follows a group of middle-school kids who are burgeoning filmmakers. After witnessing a train derailment while filming, they begin to stumble into a government cover-up that threatens their entire small Midwestern town.

The film crew is lead by their writer/director Charles (Riley Griffiths) and make-up artist/model expert Joe (Joel Courtney). Joe is the film’s emotional center having just lost his mother and discovering young love with Alice (Elle Fanning). Griffiths and Courtney are newcomers. This is literally their only film credit. While they both do amazing jobs, Joel Courtney is especially strong and gives a stunningly complex performance. He’s required to mix multiple emotions simultaneously (grief, fear, exuberance) and knocks it out of the park in scene after scene.

Where the film truly excels is in its character work. Abrams gives each kid a unique voice and it’s their camaraderie that draws you in. There’s a lovely meta moment early in the film where Charles explains the mechanics of effective story telling while the film is executing that exact same technique. And the entire film is an homage to, not only the films Gen-X grew up watching but, film in general. Of course, a Spielberg produced film about a group of kids going on an adventure is bound to draw comparisons to The Goonies. However, this film is much more serious in tone than that one; it’s more akin to Stand by Me. This aspect of the movie is so strong that it becomes almost counterproductive. In fact, the film’s biggest stumbling block towards greatness is that the kids are considerably more interesting than the alien adventure they go on.

While the film’s retro-vibe (in both its setting and storytelling technique) is a great deal of fun, it’s hard not to feel as if Abrams hasn’t brought anything new to the equation. Even though he recreates the atmosphere of early-Spielberg extraordinarily well, at times it seems more like watching a tribute band. A really, really good tribute band…but a tribute band nonetheless. The movie flirts with greatness but never quite achieves it. But that doesn’t stop it from being a fun ride and the kids’ performances more than make up for its slightly anti-climactic finale.