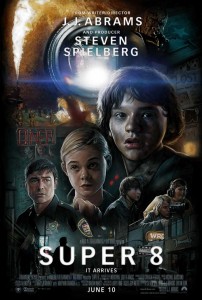 In “Super 8,” writer / director J.J. Abrams shows us what it would be like if “Stand By Me,” “LOST” and “E.T.: The Extra-Terrestrial” were all combined into one epic film. Many elements are reminiscent of the aforementioned material, and the result is an amalgamation that puts it right up there amongst the classics that it compliments.

In the summer of 1978, five friends and amateur filmmakers are getting ready to work on a super 8 movie to submit to a local film festival. Months earlier one of the friends, Joe Lamb (Joel Courtney), experienced the death of his mother from an accident at the factory where she worked. Meanwhile his father (Kyle Chandler), who is also the deputy sherif, doesn’t think he should spend so much time with his friends who are obsessed with making monster movies. Little did any of them expect that they would capture a train crash containing extraterrestrial cargo during filming, that would unleash a series of unexplainable events across their town.

The film has a distinct nostalgia factor to it, especially modeled after Steven Spielberg’s older work from the 70s and early 80s. That comes as no surprise, as Spielberg has a producing credit and has had his name attached to the project pretty heavily since the beginning. The look and feel of the movie is perfectly modeled after films of the era it takes place in, while maintaining extraordinary quality without scratches and lines through the print. We get the best of both worlds, and it was a great choice to give it that touch to really place the characters in that time period. Everything from the clothes to the cars and buildings were spot on.

“Super 8” revolves around a group of young protagonists, comprised of a handful of unknowns that are sure to get some attention in the near future. Joel Courtney, who plays Joe, is really the star of the film. Courtney does an incredible job in his first leading role, and is a tremendous up-and-coming actor. Charles (Riley Griffiths) is the budding filmmaker, anxious to finish his zombie masterpiece in time for the Cleveland Film Festival. His pudgy and lovable character provides much of the comic relief. Martin (Gabriel Basso) is the star of the film, who plays a detective investigating the zombie outbreak. Basso is also a St. Louis native, who has the potential to really break out in film. Cary (Ryan Lee) is the explosives and special effect expert who also brings levity into a more serious moment. Preston (Zach Mills) doesn’t get as much screen time as the others, but does a fine job as he rounds out the group. The guys also meet up with Alice (Elle Fanning), who plays the female lead in their super 8 film, early on in the picture. Fanning has really grown up over the past couple of years, and is someone who is sure to follow in big sister Dakota’s footsteps.

The special effects are truly impressive throughout the entire film. Lucasfilm’s Industrial Light & Magic does a great job with the computer generated effects, and Abrams was consistent in keeping a healthy balance between CGI and physical FX. There are some spectacular action sequences where things are blowing up left and right for what seems like minutes at a time. In particular, the train crash stands out, of which the entire plot is based around. The crash sequence was beautifully directed, and incredible to watch – not to mention listen to. The sound effects were just as impressive. In keeping with the intrigue and mystique, similar to that of “LOST,” we don’t see much of the monster that wreaks havoc throughout the movie. But what we do see is pretty awesome.

So far the Summer movie season has been off to a great start. If you are still waiting for the first big movie to come out so you can get to the theater, the wait is over. “Super 8” has a little something for everyone; there is a nostalgia factor for fans of movies from the 70s and 80s, the action element for those who love to see things blow up, and simply a compelling story that the entire family can enjoy. This marks another success for Abrams as a writer and director, solidifying that his name is going to be prevalent for years to come.