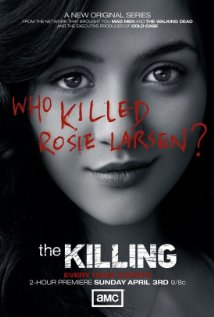 This week’s episode of “The Killing” entitled “Beau Soleil” turned the focus back on to the murder case that the show is based around and the ending was something that I never in my wildest dreams expected!

In the episode we learn that Rosie was going to the ATM at Wapi Eagle Casino on a regular basis to deposit a substantial amount of money, and later we learn that the account was opened in her Aunt Terry’s name. Even later we learn that Mayor Adams’ attempt at retaining his mayorship has just taken a major hit when a body is dug up at the base of his “Water front” campaign. After that stunning turn of events Adams is shown meeting with Gwen (one of Richmond’s Advisor) and handing her an envelope saying that she should watch which politicians she gets in bed with (Richmond and Gwen are sleeping together). Gwen thinks nothing of this until we get to the end when she looks at the photo’s and is thoroughly shocked by what is in them, but I won’t say what that was quite yet.

Later Mitch Larsen confronts Belko after she receives a message from Yani (Stan Larsen’s old Mob Boss) and she tries to get some information out of him and when he says nothing then she fires him from the moving company. Next, we learn of Terry’s involvement with an escort company called Beau Soleil and when she is questioned as to why she was photographed wearing the exact shoes that were found in Rosie’s closet she says that she gave them to Rosie because she liked them. Later we find out that Rosie was involved with the same service as her Aunt. Mitch later confronts Stan, in prison, about the fact that they have no money in their bank account (Mitch doesn’t know of the house Stan is buying to surprise her) and that ends with Stan walking away blaming Mitch for his current situation. Later, when Terry ask Mitch when she is bailing Stan out she responds that she is not bailing him out because he gambled away all their money.

In the midst of the episode we find out a little bit more about Tom Drexler (the wealthiest backer of Richmond’s campaign) and his background of abusing women, other legal troubles, and consistent drug use. Also throughout the episode you find out a little bit more about Beau Soleil and a customer that goes by the name of Orpheus. On the site for Beau Soleil they have a message board of stories and of troubled customers, and a Celine (her characters real name is Aleena Drizocki) states that this Orpheus guy drove her down by the water front and started asking weird questions about drowning and things of that nature. It also turns out that this Orpheus character deleted his account with Beau Soleil on the night of the murder at 4 a.m. , and because of that the site has no records as to who he would have went out with, other than Aleena, but they do have record of his e-mail address. Linden then e-mails Orpheus with the subject of “I KNOW WHAT YOU DID”.

Later Linden and Holder set out on missions to find out some more information. Holder proceeds to request the services of Celine and when he gets her in the room he immediately starts questioning her and she, frightened for her life, doesn’t give him any information because she is scared of what Orpheus may do to her and she eventually runs out of the room. While this is going on, Linden proceeds to Councilman Richmond’s house to ask him a few questions and warn him about Tom Drexler. While this is going on Holder receives a phone call, at the hotel, from Aleena saying that if he wants to find out who Ortheus is then he should go to 5th and Jackson. Before Linden can ask Richmond any questions he receives a phone call and walks away. While Richmond is gone Linden receives a phone call from the deputy at the station, who she assigned to watch for a response from the e-mail, and he informs her that the e-mail has been read and she then tells him to flood his e-mail with the exact same message. While she is on the phone with him (Remember she’s in Richmond’s condo) she vaguely hears  a sound signifying a e-mail so she tells the deputy to continue sending the e-mail while she searches for the noise, which is simultaneously going off with each e-mail sent. Then at basically the same time, Linden stubbles upon the exact e-mail that she has been sending and Holder comes across a window filled with posters promoting Richmond for mayor and Gwen is shown going through pictures of Richmond driving around with Rosie by his side in the car, and then finally the episode ends with Richmond posing the question of “What are you doing?” to Detective Linden.

The talked about Ending:

I can’t say much about this this episode other than…..that was not what I was expecting from the episode at all!!! I have never once thought of Darren Richmond as a suspect in this case. He has been one of the nicest and least dirty political figures that I have ever seen in my life and the fact that he is still dealing with the death of his wife has kept him completely off of my own personal radar in this case, but now I can see that with everything that has been disclosed connecting Richmond to Rosie, I don’t know why I didn’t think of him as a suspect from the get go. I always just thought that there was a possibility that maybe Jaime (Richmond’s Assistant) was the suspect in this case but never Darren himself.

Before I go any farther I think I need to retract last week’s statement of that being one of the most pointless episodes yet because after watching it back it really wasn’t as bad as I made it seem. Sure it didn’t have anything to do with the case but it did give you some more character development for Holder and Linden…which I thought could be useful for the final couple of episodes of this season. Like a commenter pointed out this show’s most compelling thing is the characters, and the more I think about it they seem to focus on developing at least two characters in each episode (Tom Drexler and Terry Marek this week) and I think that has been one of the things that has pulled me in on this show and got me completely hooked.

Now with all that being said I am extremely excited for next week’s episode and for what they are potentially going to give us to close off the season. AMC teased it by saying that the last five minutes will keep you talking all summer and I am hoping that it is exactly that good. I really don’t think I have anticipated a season finale this much in a long time so I am officially counting down the days till next Sunday.

To Watch a Sneak Peek of Next Week’s Episode Go Here: