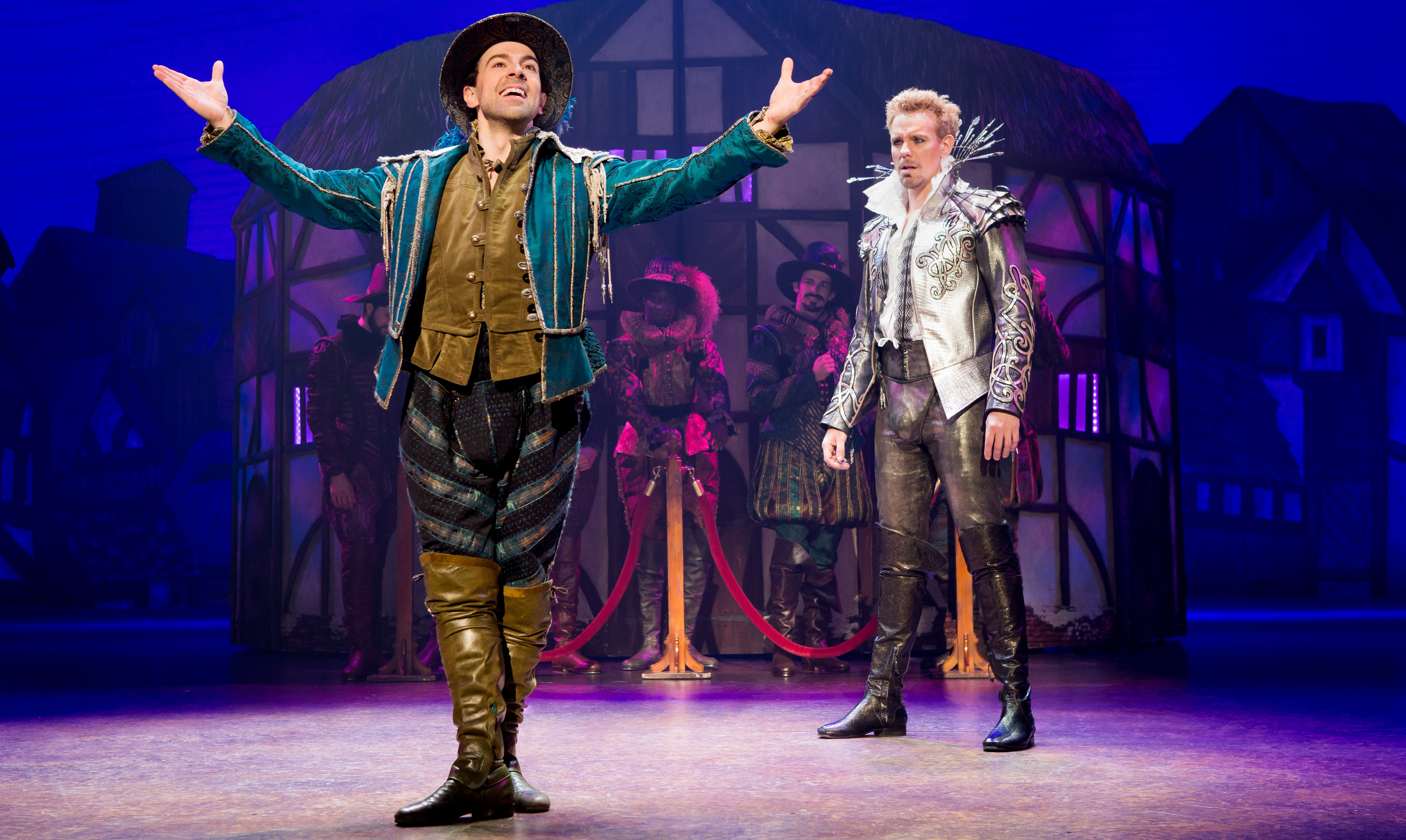 The name Shakespeare isn’t generally synonymous with a laugh riot. Star crossed lovers, taking their own lives at the thought of living without one another. A prince whose father is murdered by his own uncle. A murderous king consumed by paranoia and power. These are only a few examples of his most famous tragedies, for which “The Bard” is best known. So how did the world’s most famous writer and poet get mixed up with a musical comedy about playwrights struggling during the Renaissance? The Bottom Brothers – that’s how! 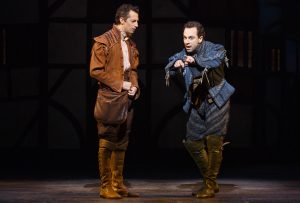 Nick (ROB McCLURE) and Nigel (JOSH GRISETTI) Bottom are two brothers endlessly working to write a play of any consequence. Further complicating their plight is the fact they are competing with William Shakespeare (ADAM PASCAL), the famous actor-turned-writer who used to perform in their very theatre troupe. With Shakespeare’s status as the modern day equivalent of a rock star, the brothers find it difficult to gain any traction with their plays. After the wickedly clever number “God, I Hate Shakespeare,” Nick visits Nostradamus (not THE Nostradamus, but rather his nephew Thomas Nostradamus played by BLAKE HAMMOND) who predicts the future popularity of theatre revolves around musicals. His visions, brought to life by the hilarious number “A Musical,” give Nick the inspiration for the brothers’ next show.

Speaking of brothers, Something Rotten! is the brainchild of real-life siblings Karey and Wayne Kirkpatrick. The two worked on the concept for nearly a decade, when they finally brought it to author John O’Farrell to help with the book. The show made its Broadway debut in March 2015, directed and choreographed by Casey Nicholaw (Aladdin, The Book of Mormon).

Right off the bat, it is hard not to be mesmerized by the gorgeous 17th-century costumes. Every member of the ensemble is easily discernible, wearing their own unique colors and patterns. The outfits are absolutely breathtaking, instantly drawing you into the world the show presents. Along with the carefully crafted backdrops and lighting design, the sights alone are something beautiful to behold. 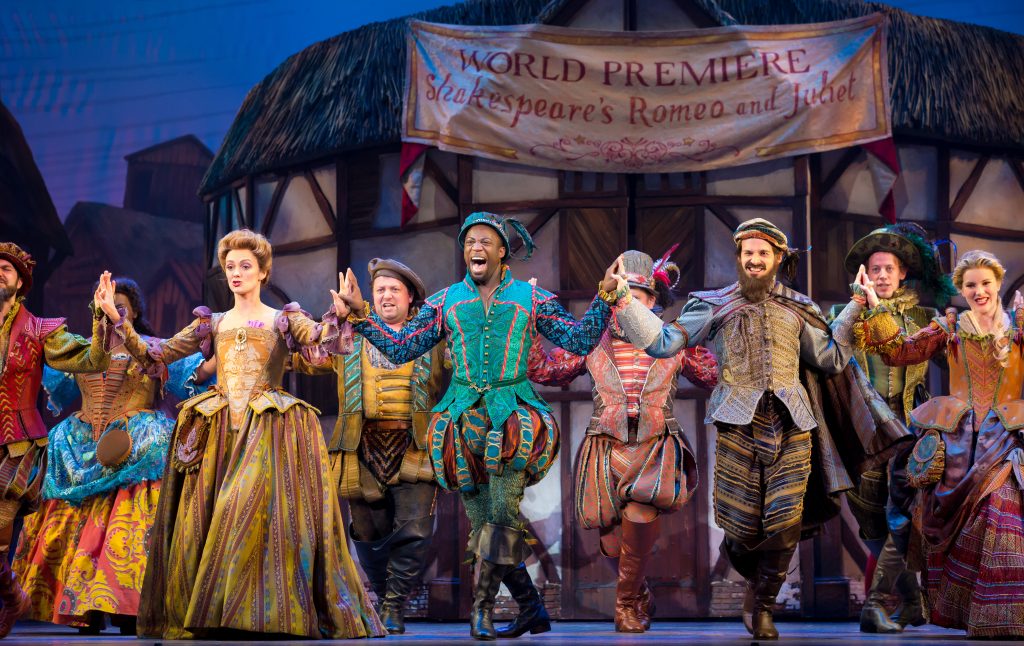 Cast of the Something Rotten! National Tour. © Jeremy Daniel

A fan favorite for many patrons of the Muny, Rob McClure is no stranger to St. Louis. If this is the first time you have ever seen the charismatic actor, this will come as no surprise. McClure exudes a certain kind of energy, one that even the most talented of actors hope to channel. Every time he steps onto the stage, it’s as if he carries with him his own natural spotlight. His singing voice is wonderful, and his dancing never ceases to entertain. Yet it is his personification of the character, Nick bottom, which is truly brilliant. There is never a doubt that the actor truly loves what he does, and that he is wonderful at his job.

Bea (MAGGIE LAKIS), Nick’s wife (as well as the actor’s in real life), is his “Right Hand Man.” Lakis is ever so talented and funny, and is a delight to see whenever she pops up randomly. The character is constantly one-upping her husband as the “man” of the family. And as her manliness grows, so do the laughs.

Never far from McClure is Josh Grisetti, playing Nick’s innocent and lovable brother Nigel. The actor is fantastic in his own right, the real talent behind his brother’s ideas. It is great watching the character grow throughout the show – from spinning around in his sleeping spot like a dog on the floor, to becoming a man who knows what he wants – and is willing to fight for it. Much of his new found inspiration comes by way of a muse: Portia (AUTUMN HURLBERT), the daughter of unyielding puritan leader Brother Jeremiah (SCOTT COTE). Like Grisetti, Hurlbert has a beautiful voice – and the two actors share a great chemistry in many wonderful scenes. Their song “I Love the Way” is a lot of fun. 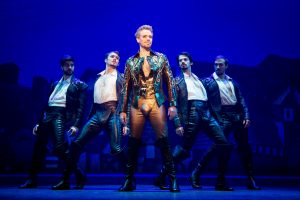 Adam Pascal and the cast of the Something Rotten! National Tour. © Jeremy Daniel

Playing the foil to the Brothers Bottom, William Shakespeare, is none other than Adam Pascal. For myself, a diehard fan of RENT, I was overjoyed to be watching the original Roger from the beloved musical. And Pascal didn’t earn that honor simply by coincidence. The actor is absolutely perfect for the role, exhibiting never-ending confidence and charm, with talent to spare. Not only is his characterization downright hilarious, but his voice as the singing bard is as magnificent as you would imagine. He was a perfect choice to play opposite McClure, who might drown out a lesser personality.

The music in Something Rotten! is great, and will have audiences rushing to grab the cast recording. Not only are the songs catchy, but extremely clever in their references to Shakespeare. And the famous playwright isn’t the only one who gets the comedic treatment; no famous musical is safe from the witty commentary and loving jabs to the theatrical genre. You can tell that the book and lyrics were crafted with nothing but care, and will surely take a second or third viewing to realize all of the show’s brilliance.

What makes this musical so wonderful, and so fun, is that there is something in it for everyone. If you love Shakespeare, you will love this show. If you hate Shakespeare, you will love this show. Something Rotten! is unmistakably a musical, yet there is even a clever commentary for lesser fans of song and dance routines. However the music is so good, and the numbers are so entertaining, that this is the show that could make a believer out of anyone.