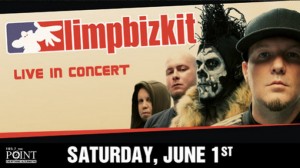 Limp Bizkit was once one of the biggest bands in the world. Turn back the clock to 1999, and they were selling out arenas, similar to the Scottrade Center. In fact, I remember seeing them play there. It’s amazing how fast times have changed. Bizkit returned to St. Louis on Saturday night, to a sold out crowd, not at an arena, but at Pop’s Nightclub.

Despite being widely irrelevant in the music industry for nearly 10 years, Fred Durst and the boys showed that they can still bring the noise and rock a crowd as they took the stage at 10 p.m. on Saturday night.

While the crowd, made up of mostly late-20s and early-30s males, was not let into the venue until 8 p.m., the line was one of the largest for a concert I have ever seen at Pop’s. When I arrived around 7 p.m. the line stretched from the entrance of Pop’s, to the right of the building, all the way to the parking lot and wrapped around The Oz. It was clear that people are still interested in Limp Bizkit. Most patrons that I spoke with in line were there for the same reason I was, to relive a bit of our youth, while some wondered if Bizkit would be a trainwreck.

Happily, I can report that the band sounded better than ever. With an all original lineup, besides DJ Lethal, the band seemed to really enjoy playing a small club. It’s no secret that guitarist Wes Borland is the best asset of the band. Durst, being the leader, for better or worse, of the group, is smart enough to allow Borland to do his thing. He dresses in outrageous and downright weird costumes, but is one of the top guitar players of my generation.

While jokes were being made before the show, that Durst might be older and fatter, the band pretty much looked the same. Durst came out sporting a black and yellow Adidas jump suit with a red trucker hat. The only thing different about Durst was a dark black beard. Fans were loud and rowdy from the get go, as the club was pack to the brim, or “assholes to elbows” as a concert-goer next to me stated. With so many people in the club, the temperature was probably close to 90 degrees. Everyone was dripping with sweat, but it didn’t matter once Durst and his crew took the stage. Surprisingly, Bizkit opened with two of its biggest hits, “Rollin” and “Nookie”. Durst interacted with the crowd on a pretty regular basis, stating he was a Cardinals fan at one point, which elicited a loud roar. He also tossed bottles of water into the crowd on several occasions.

The highlight of the show for me was when the band played several short covers of songs from Pearl Jam, Metallica, Smashing Pumpkins, and the White Stripes. These songs all led to one great cover of “Killing in the Name Of” by Rage Against the Machine. Durst even made his way up to the balcony at one point to let the people know that the party was on the floor.

Having seen Limp Bizkit half a dozen times prior to Saturdays show, I was on the fence as to what to expect. I had always been a pretty big fan of the group, but like many others, had grown a bit tired of Durst’s ego over the years. While it is highly unlikely the band will ever reach the heights of stardom it once had, it does have a new single out, which is pretty catch, as well as a new record deal with Cash Money Records. If Saturday was any indication, maybe Durst has grown a bit wiser with age, and maybe even been humbled a bit by his bands fall from grace. While not the major rock star he once was, it is clear that age hasn’t slowed him down on the stage, as he and his band mates can still bring one hell of a rock show.