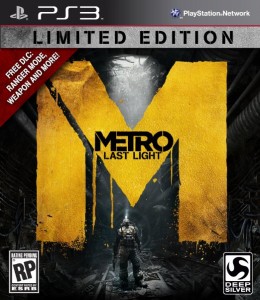 Metro 2033 was a game I almost let slip under my radar back in 2010. I hadn’t heard anything about it and I was also unfamiliar with the developers, 4A Games. But, the story sounded good and it’s not often we get games based off of books, so I gave it a shot. The game turned out to be one of my most enjoyable games that year. I was treated to a rich and detailed world, interesting story and quite a few creepy moments. However, the game suffered a few gameplay hurdles, a strong learning curve and it pretty much demanded that you have a super computer to run it.

Despite all the things going against it, Metro 2033 sold enough to get a sequel. I was super excited when I heard the news. I really felt that perhaps 4A Games, given another shot, could create something amazing and much more accessible to players of all types. However, the world seemed against them. 4A Games was owned by THQ. If you’re not aware, THQ foreclosed in 2012 and 4A was acquired by Koch Media. Despite the change in ownership, 4A Games still managed to ship Metro: Last Light. The developers also faced non-ideal working conditions, trouble with development hardware and shakedowns from the Ukrainian mob – no joke. It’s a miracle this game was able to see light of day, no pun intended.

The world of Metro: Last Light has humans living below the charred and decaying remains of Moscow. The people were forced underground after a mutually assured destruction-type of event that took place years ago. The surface is uninhabitable and there are lethal radiation hotspots everywhere. And to make matters worse, the nuclear fallout has spawned creatures of almost alien-like appearance whose only goal in life seems to make sure you have a really bad day.

Last Light puts players in the shoes of metro dweller, Artyom, picking up right after the conclusion of the first game. The game does a good job of recapping the events of the first so players aren’t blindly jumping in and feeling overwhelmed. Keeping spoilers to a minimum: your decisions in the first game have had unforeseen consequences that you must deal with. Your goal is to find the last of a non-human species – that you eradicated in the first game – and kill it. However things are not always what they seem, especially in the Metro. Artyom will face not only creatures of war, but other humans as well. 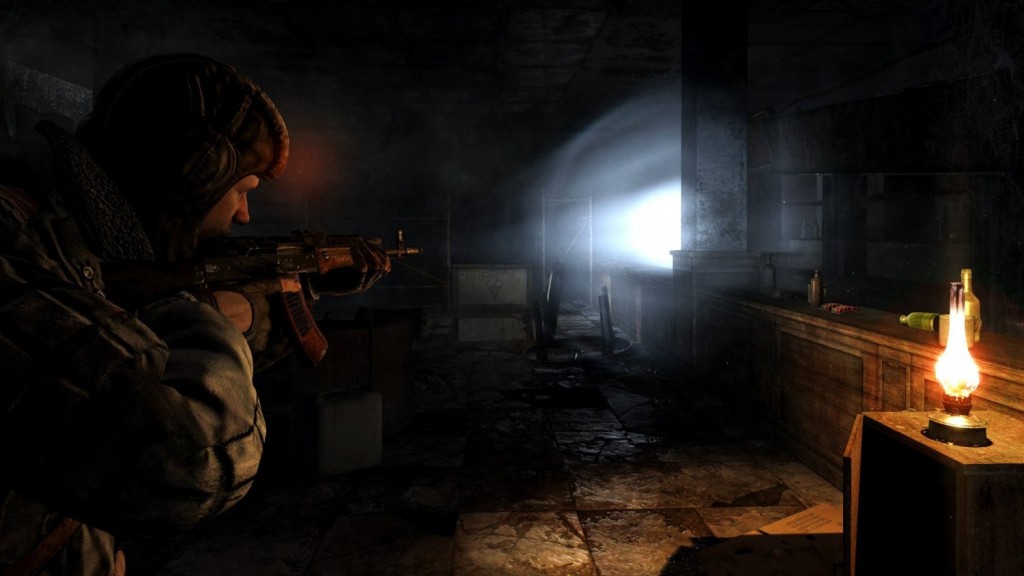 The fascinating thing about the Metro is that life has moved on, and things almost never change; money still exists in the form of pre-war bullets that you use to buy upgrades for you weapons, or if you choose, use them for their better stopping power on tougher enemies. Within the underground world, communities have formed, alliances created and factions have been established. The game does one of the best jobs at creating a visually believable atmosphere for the players. As you walk through the cities you will see children running and playing, people listening to music and friends carrying on conversations over food and drinks. The amount of detail and love put into these towns is stunning. It really feels like a living community. Sadly, a lot of it is pre-scripted and you’re unable to interact with most objects or NPCs. I also ran into the dreaded “invisible wall” a few times and unfortunately that pulled me out of the experience.

Artyom will make his way through the three different factions of the game as well as traverse the surface – my favorite parts of the game. But on your journey, you find out the real danger may not be lurking on the surface, but may very well be within the cities of the Metro. You will come across the neo-Nazi inspired Reich, the communists of the Red Line and the free people of Hansa. And they all pretty much get along as you’d expect; the neo-Nazis hate the communists, the communists hate the neo-Nazis and the Hansa, well, they hate everyone that’s not them. However, the communists have set plans in motion to take over the other parts of the Metro, killing anyone who stands in their way. Artyom is thrown front and center, and as a result, is backstabbed and generally getting the crap end of the deal most of the time. Expect twists, turns and overall turmoil as you battle your way through the campaign. The game allows for stealthy and violent approaches to the many combat scenarios. The violence in this game is pretty vanilla, but what really caught me off guard was a rape scenario – that the player has a choice of intervening in or not – a lap dance by a naked and fully rendered stripper, and an oddly placed sex scene between Artyom and his love interest. The game seems to hold nothing back and goes to lengths to ensure you the worst of humanity has survived the apocalypse (the rape, not the strippers).

The game is visually stunning and there are quite a few moments where I stopped just to admire the view. For most of the game your character is alone and you will routinely find yourself in bad situations that make you question your judgment-making abilities. However, the coolest part of the game was when you get to venture outside above the Metro. Buildings are broken, the sky is grey and nuclear born creatures threaten you at every turn. This made me tense and stressed, and I loved that. I’m not a fan of predictability in games and there were a few moments that made me jump or question rounding the next corner. 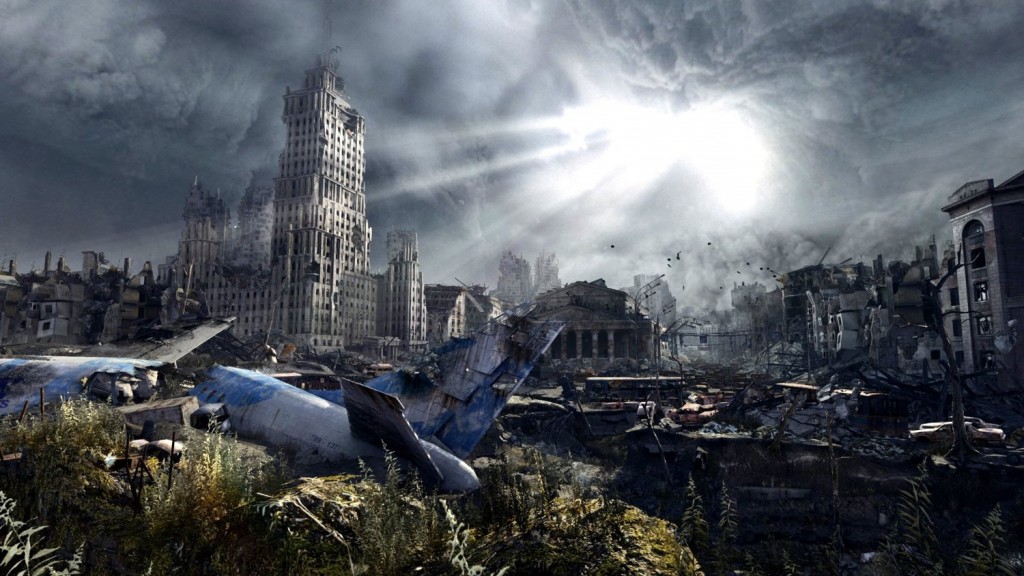 I played the game on the Xbox 360 and noticed no hard hits to the performance on the game. It is noted, however, that the PC version has experienced technical issues with users who use Radeon video cards, so that’s something to keep in mind. The game’s difficulty also stays persistent throughout the 10 hour campaign. I played on normal and I only encountered one area where I was forced to lower the difficulty because I was low on ammo and didn’t feel like starting the level over. However, diehard survivalists who love counting bullets and living on the edge will love the challenge the game brings in the harder difficulties.

All in all, I enjoyed my experience. The game has two different endings, which ending you get is dependent on a few player controlled choices you have throughout the game. The story is interesting enough to keep you engaged and has enough action to satisfy the Call of Duty crowd. Despite a few technical mishaps and odd design choices here and there, I don’t think this game should be missed. The developers went through cramped working conditions and stresses that don’t plague western developers. They worked hard to bring you a different kind of story, not full of perks and killstreaks, but full of social taboos, character and maturity.

Metro: Last Light is available on the Xbox 360, PlayStation 3 and Windows.