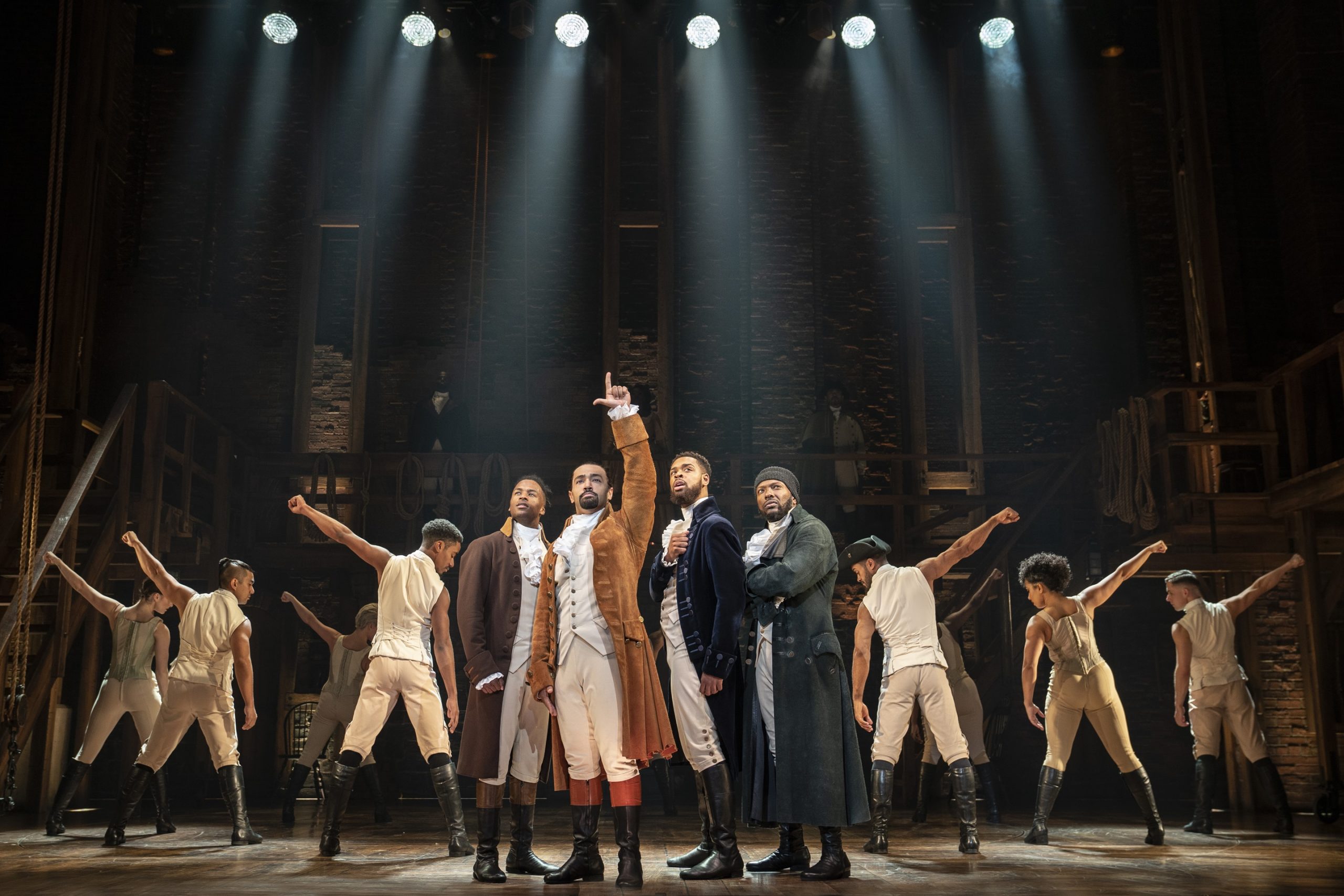 Now playing through May 15.

With the unfortunate delay of the 2020 Broadway Series, audiences in St. Louis were forced to “wait for it” a little longer – with the North American tour of Hamilton finally returning this month.

Lin-Manuel Miranda reintroduced the world to Alexander Hamilton in 2015, with the show quickly becoming one of the most popular musicals of all time. Hamilton won 11 Tony Awards (one shy of tying The Producers for the record) including Best Musical, making it clear the Broadway world would never be the same.

The first tour took place in 2017 (read our review here), allowing millions to experience this cultural phenomenon. The release of the 2020 film featuring the original Broadway cast on Disney Plus brought interest to an all-time high, priming audiences for their return to live musical theatre.

For the uninitiated, the musical follows Founding Father Alexander Hamilton (PIERRE JEAN GONZALEZ) from his arrival in New York City in 1776, where he meets lifelong rival Aaron Burr (JARED DIXON) – along with John Laurens (ELIJAH MALCOMB), Marquis de Lafayette (WARREN EGYPT FRANKLIN), and Hercules Mulligan (CONROE BROOKS during my performance). It is immediately clear to Hamilton and his friends that Burr wants to remain neutral (“Aaron Burr, Sir”), while they want to start a revolution (“My Shot”) for America’s independence from Britain and King George III (NEIL HASKELL).

Alexander becomes the “Right Hand Man” to General George Washington (MARCUS CHOI), and their partnership proves to be a winning combination for America. A few years later (“A Winter’s Ball”), Hamilton meets Angelica Schuyler (TA’REA CAMPBELL) who introduces him to her sister, Eliza (STEPHANIE JAE PARK), and the two would eventually marry (“Helpless”). Shortly after, we find out that Angelica had feelings for Alexander, but had her own reasons for bringing him to her sister (“Satisfied”).

America wins the war (“Yorktown (The World Turned Upside Down)”), but there is still much to do as Hamilton works “Non-Stop” to help build this new nation. Cabinet meetings headed by Washington are cleverly presented as rap battles (“Cabinet Battle #1”), and Alexander faces new challenges as his views are challenged by the likes of Thomas Jefferson (also played by FRANKLIN), James Madison (BROOKS again), and his old friend Burr.

The magic of Hamilton, in addition to the catchy songs and compelling story, is that it never feels like a chore to learn about history. The musical is comprised of 17 numbers per act, but there is never a dull moment. Song after song, the show moves at a quick pace, making the two-and-a-half-hour runtime fly by. Miranda packed three to four times the amount of words into the show compared to an average musical, without drastically extending its length. It’s a good idea to listen to the original cast recording before you see the show for the first time, just to make sure you pick up on as much as possible. Every time you listen, there is something new to pick up on.

The musical is comprised of a large cast (there are three sets currently touring, with the “Philip” cast featured in St. Louis), and everyone involved with this production is fantastic. Pierre Jean Gonzalez does a great job making the role of Hamilton his own, with subtle choices that are interesting to watch after the world has become so familiar with Miranda’s portrayal (and rightfully so, he’s a genius). Because LMM is such a personality, his confidence and familiarity with the character can overshadow the character’s naivete early on in the show. Gonzalez, through his body language and delivery, manages to show Hamilton’s youth and inexperience (as he sings, “Only nineteen, but my mind is older”). As Alexander finds his place in the battle for America’s independence, his confidence grows, and the portrayal evolves.

Hamilton’s core group of friends is fun to watch as they meet, celebrate, and fight together for this new nation. Warren Egypt Franklin has a personality that lights up the stage, and he steals the show when he shows up as Thomas Jefferson (in addition to Lafayette). Conroe Brooks, an understudy for Washington and King George as well, was excellent in the Mulligan / Madison role. And Elijah Malcomb makes for a great Laurens / Philip Hamilton. In the latter role, he really sells the youthful characterization – as well as the dramatic scenes.

Jared Dixon is phenomenal as Burr, a man who has every advantage yet is upstaged by Hamilton at every turn. He and Gonzalez play well off one another, as Burr’s frustrations grow stronger with every time he is overlooked for Hamilton. Dixon has a great voice, and gives a really powerful performance of “Wait For It,” in addition to a touching rendition of “Dear Theodosia.”

The Schuyler Sisters – Angelica, Eliza, and Peggy (MEECAH in our performance) – are all sensational. Stephanie Jae Park plays the sweet and romantic Eliza, who falls head over heels for Alexander – competing for the attention of a man who is in love with his work. She and Gonzalez have great chemistry, and deliver a heartbreaking version of “Stay Alive” toward the end of the show. One of the high points of the consistently impressive show is her show-stopping number “Burn,” which had the audience roaring with applause. Ta’Rea Campbell is a force to be reckoned with as the eldest sister, who puts aside her own feelings to do what is best for her family. She delivers both powerful vocals and emotional interactions with Alexander.

Marcus Choi makes for a commanding George Washington, and his version of “One Last Time” brings down the house.

Last, but certainly not least, the role of King George III is one of the most entertaining parts of the show. Neil Haskell, who was a part of the original cast, had the audience cracking up every time he walked out on the stage. He owns the role, from the accent to the body language, and the surprisingly energetic dance moves. While he only has a few numbers throughout the show, they are nothing if not memorable.

The touring production of Hamilton is everything audiences would expect from the show that has taken the world by storm. The elaborate sets by David Korins, comprised of moving staircases and multiple levels, transition seamlessly along with the revolving stage – adding another layer of motion and depth to the performances. The costumes designed by Paul Tazewell are glorious, from the flowing gowns to the fashionable suits.

There is no question as to why this musical has remained one of the hottest tickets on Broadway, and audiences all over the world are returning to see it again and again while on tour. Lin Manuel-Miranda has crafted a show that is endlessly entertaining while speaking to the rich tapestry and diversity that comprises our nation. The music is terrific, and the performances on the tour are superb. One thing’s for certain, “You’ll be back.”

Hamilton is now playing through May 15 at The Fabulous Fox Theatre in St. Louis. Tickets are available via MetroTix or the box office. For more information, visit FabulousFox.com or the official tour site at hamiltonmusical.com.