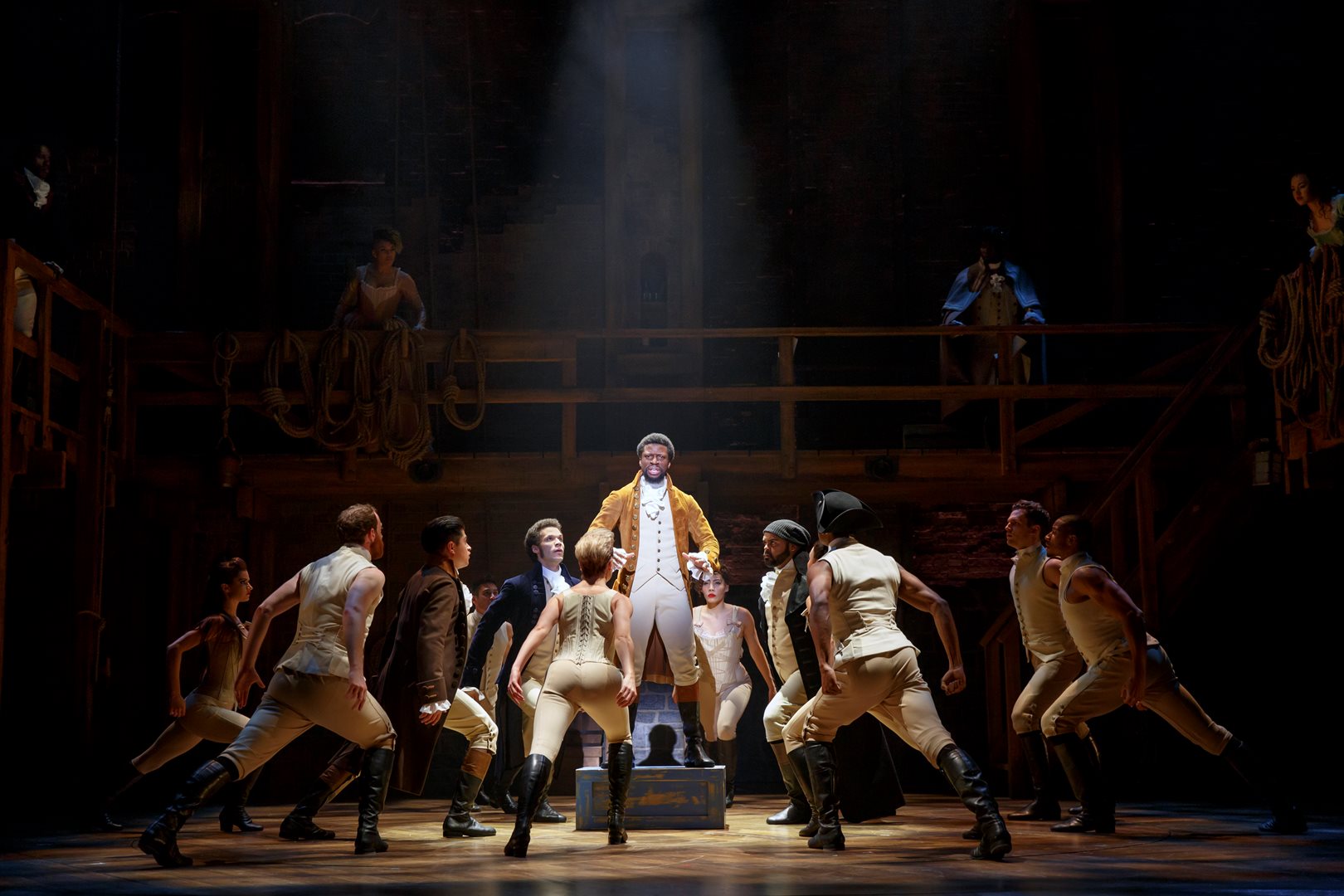 My first exposure to Hamilton – or at least what would eventually become the phenomenon – was in 2009, when Lin-Manuel Miranda performed at the White House Poetry Jam. At the time, Miranda was working on a hip-hop concept album called The Hamilton Mixtape, inspired by the biography Ron Chernow wrote in 2004. I was completely blown away by what I saw, and for the next few years patiently awaited the release of the full album. That project would eventually turn into what is now the hottest ticket on Broadway, and the rest is history.

Lin-Manuel Miranda (In the Heights, Bring It On: The Musical) is responsible for the book, music, and lyrics of this incredible history lesson turned musical. While the show never feels like a lecture, hundreds of thousands of theatergoers have learned more about the “ten dollar founding father without a father” than they ever would have from a book. The songs speak for themselves, with the best-selling soundtrack surpassing Jersey Boys in sales earlier this year to become the fifth largest selling cast album since 1991.

The story follows Alexander Hamilton (Austin Scott) as he leaves the Carribean and sets sail for the American Colonies. There he meets Aaron Burr (Nicholas Christopher), who gives him some advice which immediately separates the two from one another.  Later, Hamilton meets three men who share his interest in America’s independence: John Laurens (Rubén J. Carbajal), Marquis de Lafayette (Chris De’Sean Lee), and Hercules Mulligan (Chaundre Broomfield-Hall). They all join the Continental Army, where George Washington (Carvens Lissaint) see’s Hamilton’s potential in helping him win the war. Hamilton and Burr frequently cross paths, while the former seems to always have the upper hand. 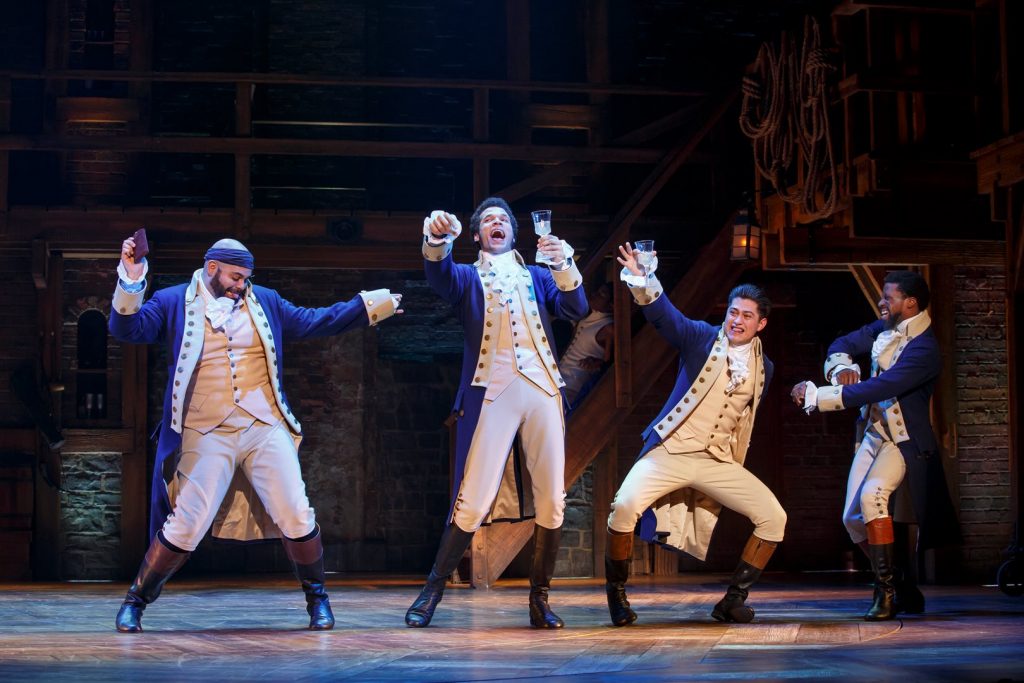 The music is phenomenal and never rests for very long before it’s on to the next promising number. You can easily listen all the way through the cast recording without skipping around (which I have done many times over the years since its release), making for a show that really locks you in from beginning to end. Hamilton is three hours long, but you would never know it while you are transfixed by the amazing performances. Miranda was also able to fit in two to three times the amount of words per minute compared to most shows, due to the hip-hop structure of many of the songs. It allows him to tell a much bigger story, without taking up much more time than the average musical. And Miranda is the best wordsmith working today, coming up with some of the most brilliant lyrics ever written.

The orchestra, conducted by Julian Reeve, sounded magnificent. The music was just as great as what I am used to, and perfectly melded with the talented vocals of the evening. Finally hearing these beloved songs performed live was a magical experience.

The cast of the show was incredible, taking on these fast-moving, hard-hitting numbers and making it appear effortless. Austin Scott plays a fantastic Hamilton, selling the character’s passion and ability to win people over. You could see his body language evolve as Hamilton grows throughout the show, and he has a voice that surely makes Miranda (who originated the role) proud. After becoming accustomed to the original cast recording, I had hoped that the tour would live up to all of the expectations. And I am happy to report that I, like the rest of the audience, was completely blown away. In my ten years of reviewing live theatre, I have never heard an audience erupt with applause like they did with Hamilton. 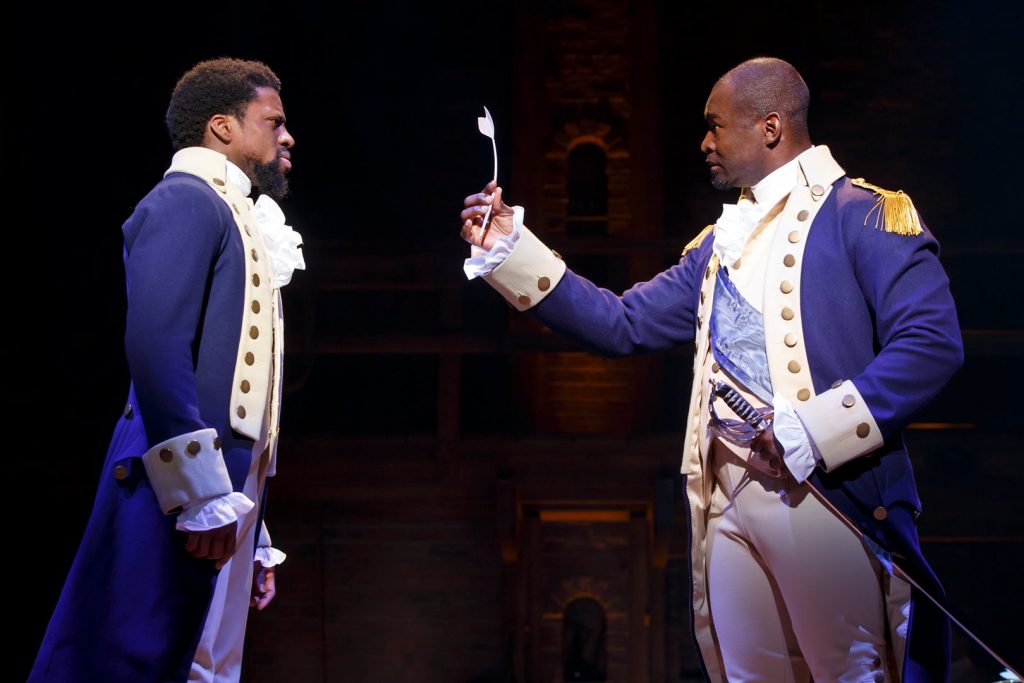 Nicholas Christopher, who played George Washington on Broadway, was terrific as Burr. He really sells his character’s frustration with Hamilton’s constant advancement and social status. The two men have a great chemistry together, which you see early on in “Arron Burr, Sir”, and carries forward throughout the evening.  His rendition of “Wait For It” was great, as was “The World Was Wide Enough.” The talented actor exhibits a wide range of emotions during the performance, and gives Scott a wonderful character to play off of.

The Schuyler Sisters are responsible for some of my favorite songs in the show. We meet Angelica (Sabrina Sloan), Eliza (Julia K. Harriman), and Peggy (Isa Briones) while they sing about life in New York (“The Schuyler Sisters”). During “A Winter’s Ball,” Harriman showcases her impressive vocal range – while Sloan shows off her incredible talent to sing and rap during “Satisfied.” Not only is the latter a great song, but the scene is really impressive in the way it rewinds time back to the beginning of the last song – as the other characters move in slow motion around her. Both Sloan and Harriman get to show off their dramatic talents when dealing with Hamilton, while Briones gets more to do as Maria Reynolds (Although Peggy does get some fun moments).

Hamilton’s three closest friends – played by Carbajal, Lee, and Broomfield-Hall – added a lot of energy and fun to the show. They offer a nice contrast to Burr’s personality, and get plenty of laughs while aiding in the revolution. Each of the actors also plays an additional role in the show. When he isn’t putting on a French accent as Lafayette, Lee is playing Thomas Jefferson – which is a hilarious character. At this point, Broomfield-Hall plays his tag-team partner: James Madison. The two get a lot of laughs as they conspire against Hamilton. And Carbajal gives an emotional performance as Phillip Hamilton during the second act. 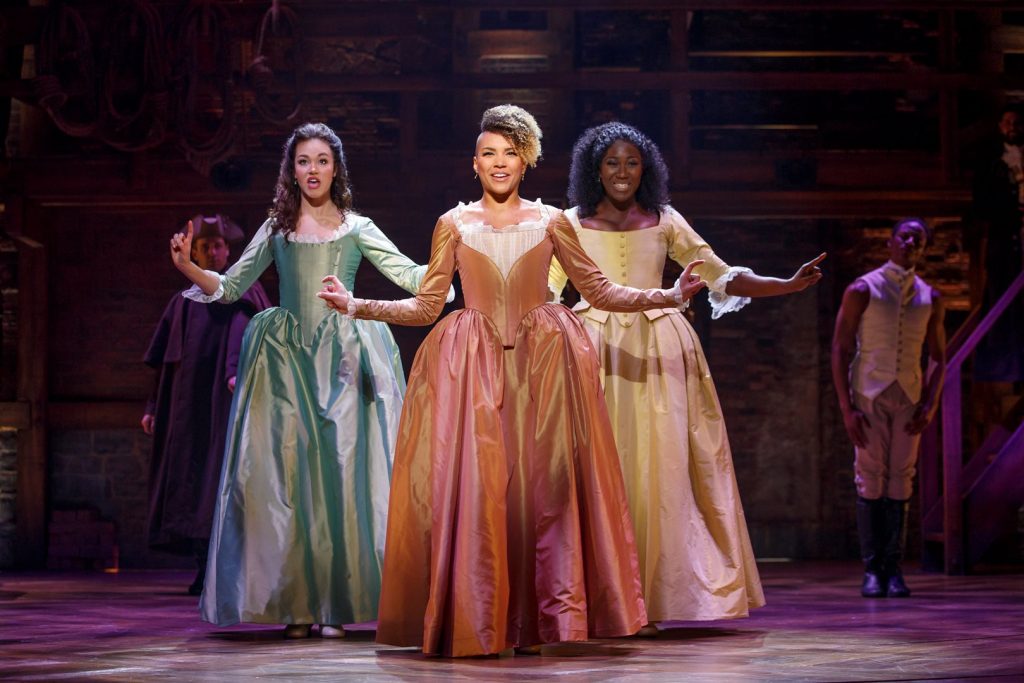 Carvens Lissaint is particularly good as Washington, giving a commanding performance as the general and first leader of the newly-formed country. He also gets to play the M.C. of more than one rap battle that takes place during cabinet meetings (another wonderful anachronistic touch).

The choreography by Andy Blankenbuehler is wonderful from beginning to end, often revolving around the multifaceted rotating stage. There is so much going on at all times, and the movements are so seamless as the actors are constantly crossing paths with one another. Having never seen the show before, aside from the clips I have seen during television specials, I never realized how complex the choreography is. And it is non-stop, another reason why it’s impossible to take your eyes off the stage for three hours.

The scenic design (David Korins) and costumes (Paul Tazewell) are first-rate. Hamilton is a great looking show. The set is simple, yet very detailed. There is not much to change in the background, while actors bring in tables, chairs, and other props to interact with the current scene. There are moving staircases, which add a neat effect when characters are arriving from ships and moving between locations. I love seeing the outfits from this time period, and all of the costumes are beautifully authentic. 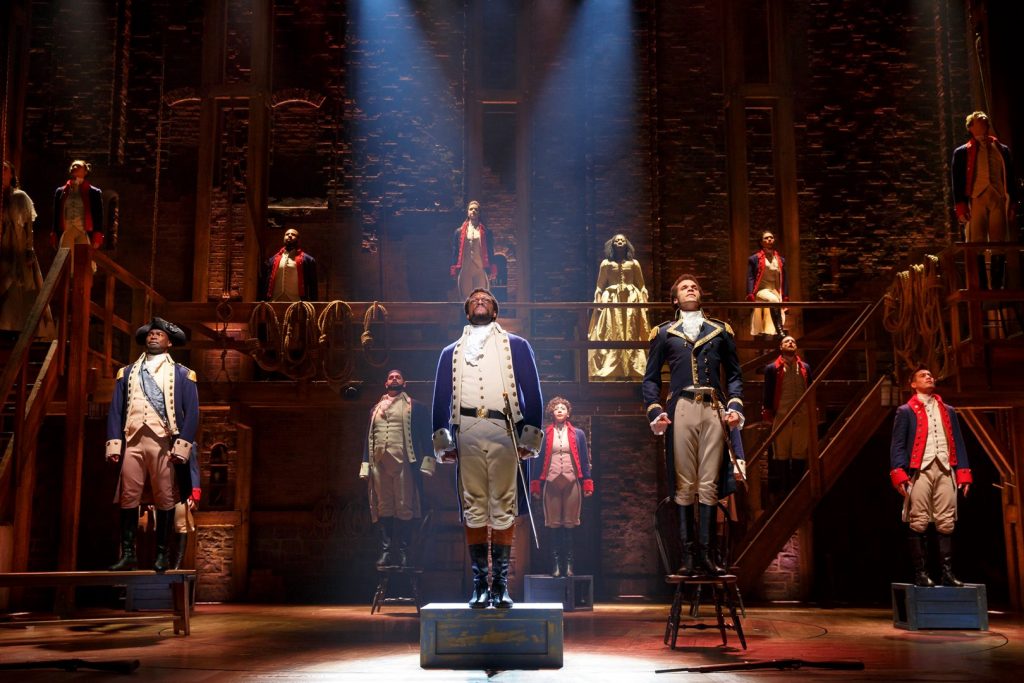 One of my favorite visuals is the “Ten Duel Commandments,” where the actors rotate on the stage while crossing by one another. It is a sort of ballet, where the characters are constantly moving and eventually end up perfectly where they belong – all while performing this awesome song. Something similar happens during “The World Was Wide Enough,” but with some really intriguing movements (something like the stage-equivalent of “bullet time” in The Matrix). These scenes are stunning, and simply awesome to watch.

There is no question as to why everyone in the theatre world has been talking about Hamilton since it took Broadway by storm in 2015. Lin-Manuel Miranda is one of the most talented lyricists and composers of this generation, and will forever be grouped with the greats like Rodgers and Hammerstein, Adolph Green, Kander and Ebb, Andrew Lloyd Webber, and all the other musical heroes. Hamilton is a show that everyone should experience, and may very well be one of the greatest shows every created. With this national tour going on (and homes in New York, Chicago, and London), make sure you do everything that you can to see it when you have the chance.

Hamilton plays The Fabulous Fox Theatre now through April 22. Tickets are available via MetroTix. For more information, visit FabulousFox.com or the official tour site at HamiltonMusical.com. 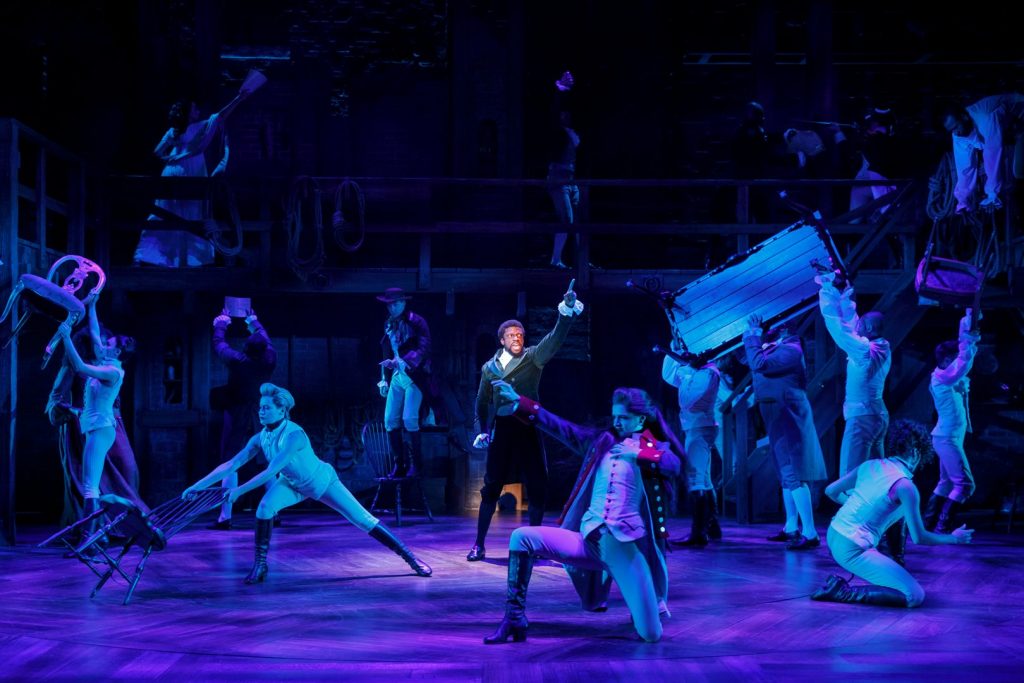 All photos by Joan Marcus.