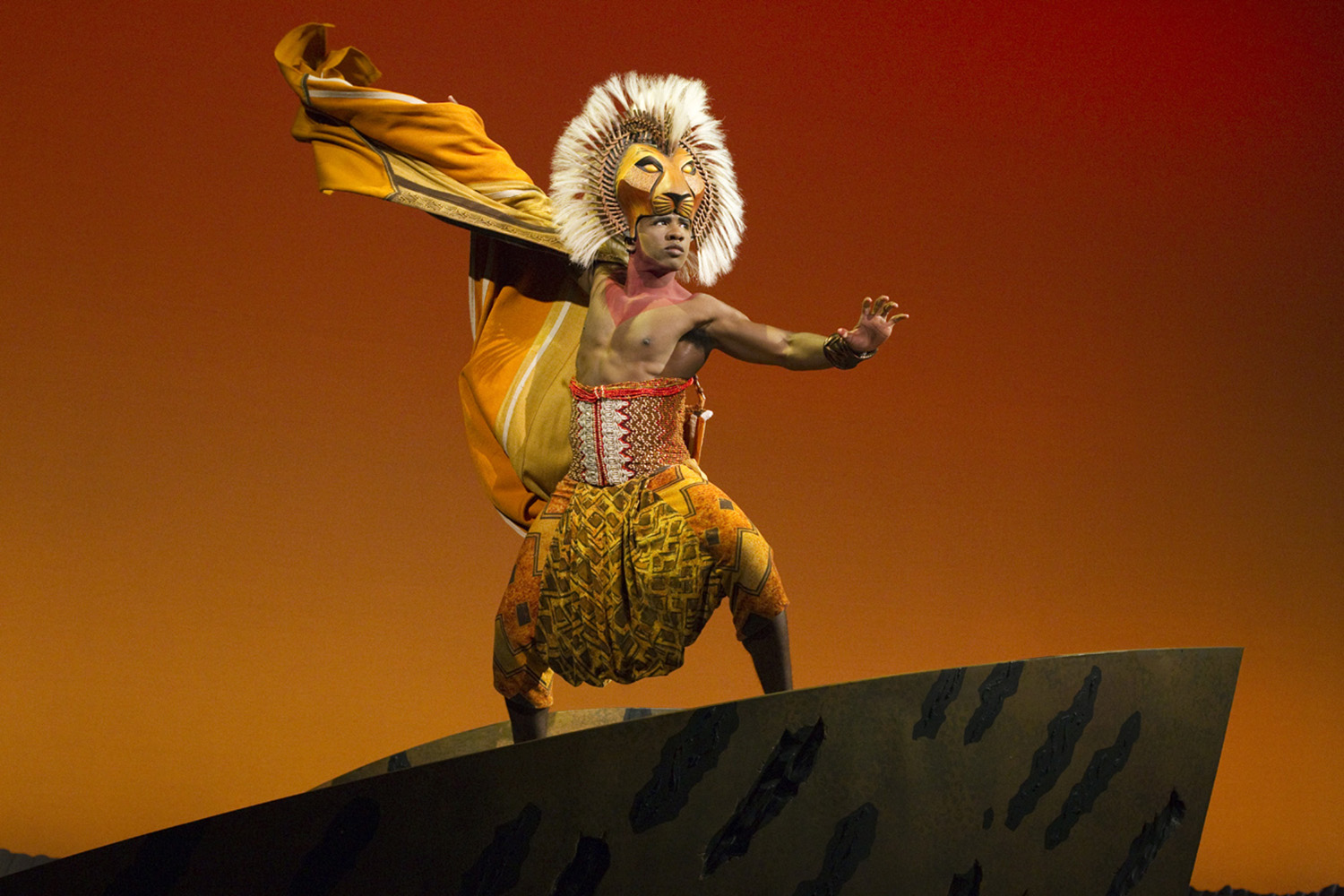 Now playing through May 7. 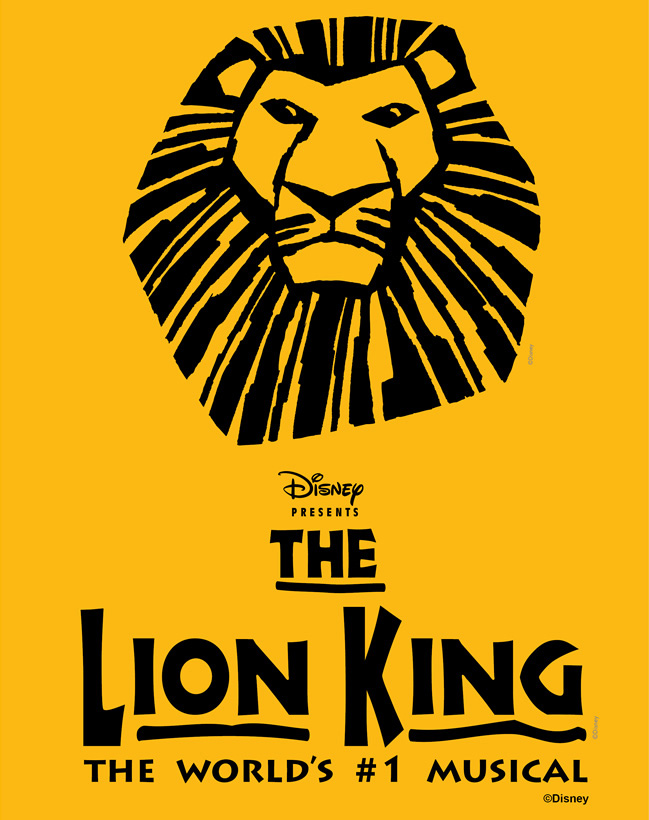 Live theater truly is a magical artform. Something that I’ve always loved about it is that each experience is unique, and the audience that night gets to be a part of something which nobody else ever will. The performances that came before, and the ones that will follow, will be similar – and contain magic of their own. But for those two or three hours in which you sit there, you get to experience something which will be lost to time – living on only through your memories. And there is nothing quite like the magic of experiencing Disney’s The Lion King live on stage.

The musical is of course based on the 1994 Disney animated classic, directed by Roger Allers and Rob Minkoff, with music and lyrics by Elton John and Tim Rice. The Lion King was brought to life in 1997 by director Julie Taymor, making its Broadway debut on November 13 at the New Amsterdam Theater. There it won six Tony awards in 1998: best musical, direction, scenic design, costumes, lighting, and choreography. There is no question as to why the show has been so successful, currently the third longest running Broadway show in history and seen by more than 90 million people around the world. The sights and sounds of the show are breathtaking, and being a member of the audience is like being a part of the show – as animals run down the aisle and onto the stage. The first five minutes of the show, during “Circle of Life” is one of the most exhilarating moments in live theatre – sending shivers through your body.

The story is very closely adapted from the original film, which is somewhat inspired by Shakespeare’s Hamlet. King Mufasa (Gerald Ramsey) rules the savanna alongside his wife, Sarabi (Sophia Stephens), and trusted advisor Zazu (Drew Hirshfield). At the end of the incredible opening number, “Circle of Life,” Simba (played by Jordan Williams during his younger years) is introduced as heir to the throne. This is problematic for Mufasa’s brother, Scar (Mark Campbell), who is jealous of his brother’s rule. Using his cunning, the evil brother tries to manipulate young Simba to his death, only to be saved at the last minute by his father. Unfortunately, Scar isn’t easily dissuaded, and eventually lures both lions into another deadly situation. Simba is saved, but Mufasa meets his demise at the hands of his brother. Convinced that his father’s death is his fault, Simba runs away – leaving Scar to take the throne. 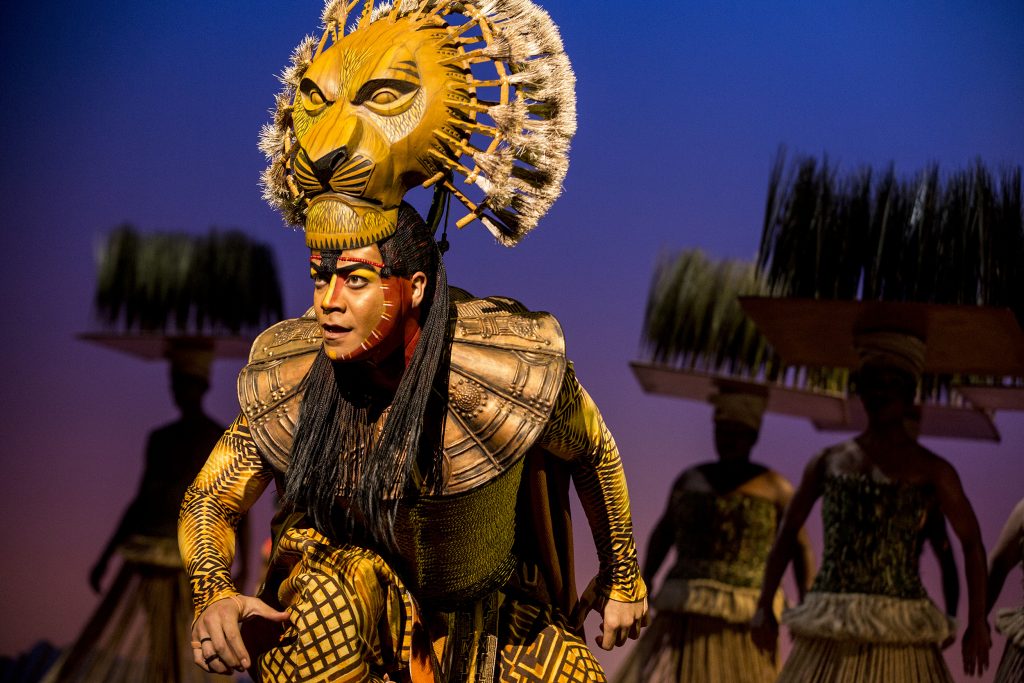 First and foremost, one of the biggest stars of the show is the music. The collaboration between Elton John and Tim Rice (Aladdin, Aida) proved to be a huge success, winning them the Academy Award for best song that year (“Can You Feel the Love Tonight”). Naturally, all of the wonderful songs from the film find their way into the musical. The orchestra, conducted on tour by Jamie Schmidt, does an amazing job re-creating the beautiful music the audience comes to experience.

There are some tremendous vocal talents in the cast. Right after the curtain is raised, Rafiki (Mukelisiwe Goba) belts out the iconic lyrics we expect to hear at the beginning of The Lion King (‘Nants ingonyama bagithi baba’). Goba’s voice is powerful, and beautiful to experience as it resonates throughout the gorgeous 4,500 seat auditorium of the Fabulous Fox. As she sings, the audience gets to witness nearly the entire cast entering via the aisles, representing easily more than fifty animals at the presentation of Simba. This includes a gigantic elephant, giraffes, wildebeests, gazelles, several birds – and everything in-between.

One of the most fun songs in the show happens early on, when the youngest actors showcase their voices in “I Just Can’t Wait To Be King.” Both Williams and Meilani Cisneros, who plays Young Nala, are fantastic as they go back and forth with Hirshfield’s Zazu. The two sound great, and looked to be having a lot of fun – which is what that scene is all about.

Vocally speaking, the two biggest pairs of shoes to fill from the original film must be Mufasa and Scar’s. James Earl Jones and Jeremy Irons are both known for their iconic voices, and Scar has an expanded singing role in the musical. Fortunately, the casting couldn’t have been better with Gerald Ramsey and Mark Campbell. “They Live in You” is new to the live show, which spotlight’s Ramsey’s rich and striking voice. It’s also a lovely song, backed by the impressive ensemble. This is a perfect example of a change from film to stage that really works well, as Mufasa sings to explain to Simba what the stars represent. This is immediately followed by one of my favorite songs in the entire show – “Be Prepared,” sang by Campbell’s Scar. The actor has a tremendous voice, having played the original Phantom in the 25th Anniversary tour, and gets to stretch both his acting abilities and vocal cords as he puts on a posh accent for the role. Another musical-only number is “The Madness of King Scar,” where Campbell gets to turn his villain up to eleven and sing about making Nala (Nia Holloway) his queen.

Read our interview with Mark Campbell.

In the animated film, Scar is frail-looking and much smaller than Mufasa. Yet in real life, Campbell is quite tall – and only barely shorter than the massive Ramsey. Therefore, the actor chooses for Scar to walk with a limp, which is quite effective when the two are standing toe to toe. His choice of the Upper Received Pronunciation for Scar also adds to the menacing impact of the character. 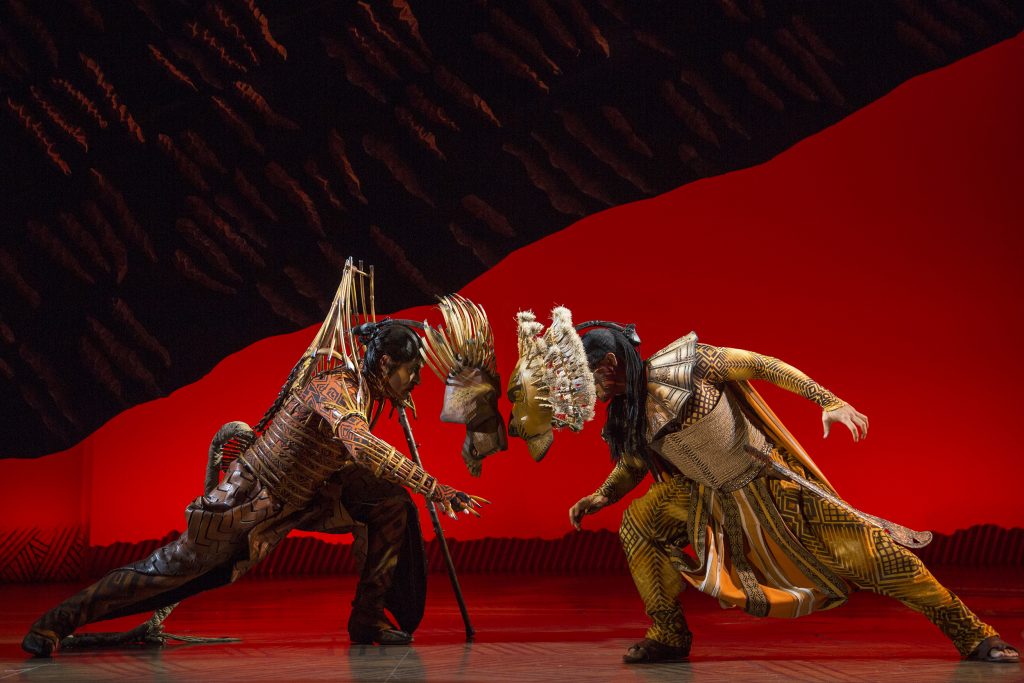 Gareth Saxe as “Scar” and Gerald Ramsey as “Mufasa” face off in THE LION KING North American Tour. ©Disney. Photo by Matthew Murphy.

Much of the comedy in the show is shared between Zazu and the lovable duo of Timon (Nick Cordileone) and Pumbaa (Ben Lipitz). Hirshfield’s delivery is perfect for the uptight hornbill, as he goes between voicing the character and interacting with the puppet in a meta sort of way. These interactions, like when the puppet is taken from him by the other animals, add a new dimension to the character as well as a fun new experience for the audience. And talk about perfect casting, it doesn’t get much better than Cordileone and Lipitz. Not only are the characters hilarious, but they add a lot of heart to the show as well. Both actors do exceedingly well with the physical comedy, and sound very close to their animated counterparts.

Introduced during “Hakuna Matata” at the end of ACT I is Dashaun Young, playing adult Simba. Young, who is returning to the role after performing it on Broadway, has a majestic voice. His show-stealing charisma shines brightly whenever he is on stage, and has great chemistry with Holloway. And even though he is quite a bit smaller than Campbell, it works well in the context of the story and he is able to hold his own.

So much work goes into designing the sets and costumes for a show like this. In fact, it took over 17,000 hours to design and build all of the animal characters for the original Broadway production. And every single bit of dedication to making the show spectacular comes through to the final product. Not only did Julie Taymor have the challenge of adapting a beloved story with incredible songs, but also had to work with a cast entirely comprised of animal characters. And the result is something unlike any other show that has ever existed. There are 14 foot and 18 foot tall giraffes; an elephant (nicknamed “Bertha”) is 13 feet long and 9 feet wide, requiring four actors to walk her down the aisle; And there are several costumes like the gazelles which allow the actors to play three at a time. One of my personal favorites is the cheetah (Aisha Mitchell), which allows the actor to recreate the movements of the animal in an incredibly life-like fashion. When all of these costumes and puppets come together, especially after most of them walk right past you down the aisles, it is one of the most amazing theatrical experiences you could hope for.

There’s a reason why The Lion King has won more than seventy major theatrical awards since its creation, spawning twenty-four global productions and has been translated into eight languages. The story is timeless, and has a universal appeal. The imaginative design and meticulous attention to detail has made it one of the most sought after shows in theatrical history, and one of the most spectacular productions in existence. With over 200 puppets, and an incredible cast, this is a show that just can’t wait to be seen.

THE LION KING plays the Fabulous Fox Theatre through May 7! Tickets range from $55 – $199 and are available at Metrotix. For more information, visit the Fabulous Fox website or LionKing.com. 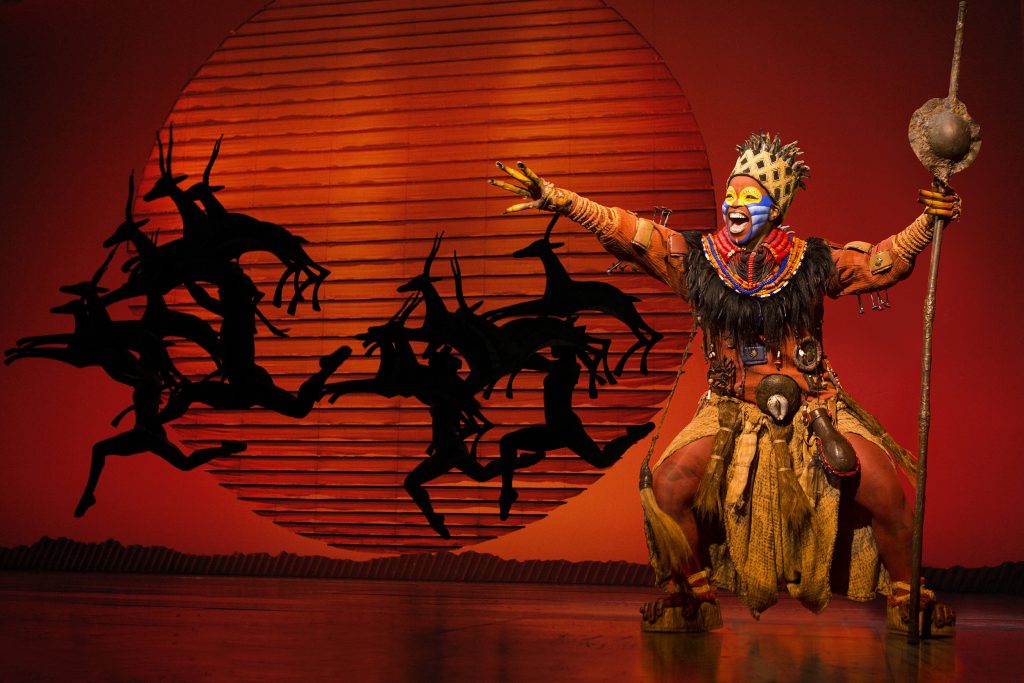