Still, we weren’t there to just to nibble on some appetizers. We wanted a delicious slab of dead cow, and damn if we weren’t well taken care of here. The pièce de résistance of my meal was a dry-aged ribeye, a generous cut of bovine crust with a hint of Cajun spice and a bit of blue cheese butter. I asked for it medium-rare, and damn if they didn’t deliver. The char crust had excellent flavor and the meat was tender. There was just a little too much excess fat on it, but given how the rest of the steak was, I was quickly willing to forgive. Each entree comes with one side, and I got the white cheddar potato gratin, which complemented the steak perfectly. I don’t think we said more than ten words to each other during the main course, and most of those words consisted of “OM NOM NOM.” Kat had the patio steak, glazed in bourbon and brown sugar, which was also quite tasty, while Joe and Ashley both opted for the filet, which appeared to be about three inches thick.

We didn’t opt for any dessert, namely because a) we were pretty stuffed from dinner, and b) my ReviewSTL budget for dessert (and dinner!) consisted of $0 [Editors’ note: Maybe because you didn’t invite us, Steve!], so I can’t attest to the desserts. Perhaps next go-around. After we settled our bill, we ended the night with a few drinks down at Sub Zero, a perfect cap to an evening down in the Central West End.

Oh, and if you’re curious about the prices, it’s reasonably comparable to any good steakhouse. Most of the entrees ranged between $21-35 or so, and I think our appetizers were $12 and $13. The cocktails range around $10, while a finger or two of whiskey will be a little (or a lot, depending on what you get) more. 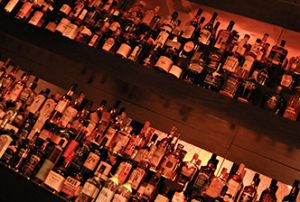 Just look at that. (Photo from Gamlin Whiskey House)

The bottom line is, if you’re a fan of steak and whiskey, you could do far, far worse than checking out Gamlin Whiskey House. Going into the evening, I’d seen and heard mixed reviews, but based on my experience, I tend to chalk the negative reviews up to the fact that it’s a fairly nascent restaurant still finding its footing. I can safely say our experience at Gamlin was superlative, and I’ll definitely be going back. There’s a bottle of Tullamore calling my name.

Gamlin Whiskey House gets an A.

For more information on Gamlin Whiskey House, check out their website here.