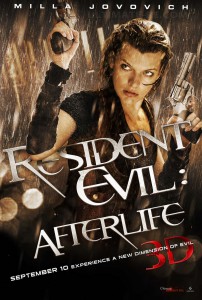 The Resident Evil franchise has its lovers and haters. I personally loved the first film. I think it stayed true to the concept of the game and the genre, but it deviated itself from the story of the game. Some people are upset with this, but I was happy. The second film felt much more like a game with its continuous action scenes. Extinction had a much different look with its desert setting. I think all three movies are entertaining, but the first is the best film. I went into the theater expecting to be entertained once more. I walked out disappointed.

In a world ravaged by a virus infection, turning its victims into the Undead, Alice (Jovovich), continues on her journey to find survivors and lead them to safety. Her deadly battle with the Umbrella Corporation reaches new heights, but Alice gets some unexpected help from an old friend. A new lead that promises a safe haven from the Undead takes them to Los Angeles, but when they arrive the city is overrun by thousands of Undead – and Alice and her comrades are about to step into a deadly trap.

Let me start with the positives. The movie looks great. Audiences haven’t seen 3D this good since Avatar. Director Paul W.S. Anderson makes great use of the technology that he is given. We get many shots including clouds, fog, rain drops, and underwater. And they all look fantastic. Also, Milla Jovovich looks fantastic. I love her in this role, and she continues to lead this franchise very well.

Now, I must tell you what killed this film for me. The film opens with some beautiful shots. Rain drops in 3D are quite amazing and then seeing bullet shells and debris flying are quite engaging. But the film never grabbed me beyond that. The story is a typical zombie sequel story. Everything is predictable. I just never got into it.

The movie is not awful. I enjoyed it more than both The Expendables and Machete. The action scenes are well shot and cool to look at, but I was bored to death. I have to ask, though, how many people are actually going to see this movie for the story.