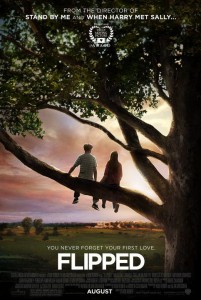 Rob Reiner’s Flipped is based around an interesting gimmick, flipping perspectives after every sequence from the boy to the girl’s perspective, but it is rarely used to any real effect.  Added to this, Reiner and companies attempt to capture the 60’s doesn’t quite work as well as they think it does.

Bryce didn’t really like Juli from the minute he laid eyes on her but Juli had other plans for the two.  Juli falls for Bryce and his dream eyes instantly and firmly holds the belief that he will be her first kiss.  But as their elementary school years pass them by, their relationship stays primarily one sided.  Juli continues to swoon over Bryce while he does everything in his power to shake her for good.  It is when Bryce’s grandfather moves in with the family that things begin to change for both of the kids and their perspectives of each other begins to evolve.

Things sound cute, sweet, and innocent in this little romance story but is in fact a dull and repetitive affair that uses its narration to beyond the level of over kill.  The entire film is narrated, as in barely a minute goes by where one of the two leads isn’t telling us what they are thinking or describing what we are seeing on the screen.  It is infuriating and as annoying as it sounds.  It is a very literary device that can work in film but is so over killed here that it becomes unbearable.  If I wanted characters describing everything to me I could go read a book.

The flipped gimmick, where we get a sequence from Bryce’s perspective then flips to Juli’s side of the story, is intriguing at first but quickly grows stale and is rarely properly utilized.  The filmmakers don’t really use the opportunities this gimmick presents to their advantage except on a couple of rare occasions.  If you are going to have such a unique storytelling device why not utilize it.  They also don’t mix things up at all with the structure of the film.  It is always Bryce, Juli, Bryce, Juli and any time something happens and we get an enlightening perspective the revelation is always within Juli’s side of the story.  Also, anytime Juli’s story catches up to Bryce’s it switches back to his side of things.  Why not have Juli’s story continue on and then the intriguing reveal falls in Bryce’s hands once or twice.

The film also fails in its attempt to try and play to the nostalgia of the era, the early 60’s, and never really sells its film’s setting.  When has playing a couple top 40 hits from a time period, especially ones that have been utilized far better in other pictures, ever won over an audience over in successfully capturing a time period.  To be fair, the film does get the broad strokes right but they feel forced and primarily there for story devices and to create drama.  From Juli’s retarded uncle being something you don’t talk about, to Bryce’s dad’s drinking, and the “all kids are punks” attitude from people everyone of these elements is used to interject drama into a story that doesn’t really have a lot to serve up on its own.  Juli’s fight for the tree is the thing that rings most true in the picture, but I felt like this could have even been executed a bit better.  I hate to compare this to Mad Men but that show captured the early 60’s so beautifully that it allows for all the surprising and shocking social quirks from the era to come out naturally.  In Flipped, the film never sells me on its recreation of the era and the result is things feeling far too forced and unnatural.  At least things look nice, if that is any consolation.

Not only is the world unbelievable, but just about every decision these characters make are seemingly for the sake of story and out of character.  I don’t believe for one instant that these kids should be together.  They are forced together by Bryce’s grandfather’s insistence and even after this Bryce does countless things that should repel Juli away.

The film is almost saying to girls, forget all the stupid shit that cute boy did once he does one act of kindness; it is enough to make up for years of being a jerk and avoiding being your friend.  Just get together with any boy you thought was cute even when he proves he isn’t right for you time and time again because he has one moment of kindness.  Way to instill confidence in young girls to realize that they shouldn’t waste their time on douche bag boys and instead just give in to the boy when he finally decides to give you the time of day; great message.

The acting in the film is also quite a mixed bag but the kids do an admirable effort.  Both Madeline Carroll and Callan McAuliffe are pretty good as Juli and Bryce, respectively, and play off each other fairly well.  They are more than capable of carrying the picture; it’s the poor use of narration and the films flipped gimmick that runs the film into the ground by the end.  Anthony Edwards has a surprisingly mediocre turn in the film as Bryce’s father and he is never once all that believable as the “drinks a bit too much” dad.  John Mahoney is one of the few bright spots of the cast as the sweet and kind grandfather of Bryce, Chet. While not quite a stretch for the actor he was very enjoyable to watch and will warm many a heart.  Everyone else in the cast is admirable but rarely given much to do.

In the end, Flipped is a missed opportunity to make a unique and interesting family film about young love and family.  The flipped device is completely underutilized and used in with simplicity that it makes the film both repetitive and dull.  At 90 minutes the film felt like an eternity and that is a real shame since there was a lot of potential with this story device.  If you are looking for a family film for everyone to enjoy, this isn’t it, and while Flipped isn’t a horrible film by any means it definitely isn’t a good one.

Flipped is a D-