Tell that to the members of the St. Louis Rams who attended Tuesday night’s screening of the film Draft Day. Starring Kevin Costner, Jennifer Garner, and Denis Leary, the film is scheduled for release Friday. 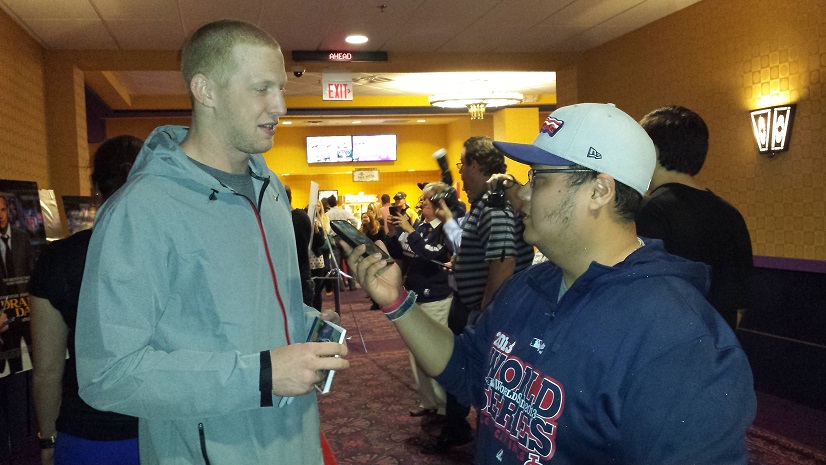 Hoping to stir up some excitement for the actual NFL draft (May 8-10) as well as the upcoming season, several players on the Rams roster (and some cheerleaders, much to the delight of the males in the audience) came out to the Chesterfield Galaxy theater and mingled with season ticket holders, signing autographs and taking pictures with the fans.

The regular season is sixteen games long (four months), but as any of these guys will tell you, it’s a year-round job. Talking with Johnny Hekker, Greg Zuerlein, and Mason Brodine, it was readily apparent these guys are chomping at the bit to get back on the field and get things turned around for a franchise that hasn’t had a winning season since 2004. I asked each of them individually what they’d been doing this off-season, and all three of them indicated they’d been at the Rams’ training facility in Earth City, working out, getting ready for training camp. 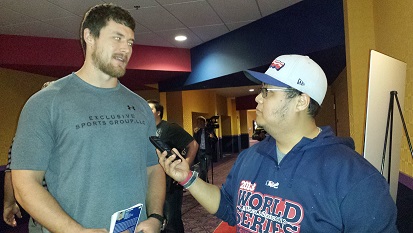 Mason Brodine is not a small man.

That’s not to say they haven’t had a chance to kick back a little bit. Zuerlein, the Rams’ sixth-round pick in the 2012 draft, recently celebrated the birth of a child, so he’s been spending much of his off-season doting over his newborn. Greg, who acquired the nicknames Legatron and Greg the Leg for his ability to make field goals from 50+ yards, greatly improved his kicking accuracy this past season, successfully converting 26 out of 28 field goal attempts. He holds several team records, including longest field goal made in a game, 60 yards. I pressed him to see if he ever attempted to kick a kick-off between the uprights, to which he laughed and said no…but said he’s done it in practice.

Meanwhile, Johnny Hekker, who signed with the Rams as an undrafted free agent, was one of two Rams (along with Robert Quinn) to head to Honolulu in January for the Pro Bowl. When asked about the experience, he couldn’t hold back the enthusiasm.

“It was incredible,” he gushed. “My family all came out. It was a great experience for all of us. It was such an honor to be recognized as one of the top players at your position, to go out and represent your team like that. It was a great opportunity.” Hekker’s 44.2 net yards per punt led the NFL, but he’s also become known for his arm and his ability to pass on fake punt plays. Although he only made one attempt this season, in 2012 he completed three attempts for 42 yards and a touchdown. It’s unusual for a punter to pass in a game, but it’s not exactly new to Hekker; he was a starting quarterback in high school, taking his team to the state finals his junior and senior years.

I’ll post my thoughts on the film in a review on Friday, but needless to say, the whole experience was pretty enjoyable. The fans who lined up for the screening were enjoying themselves, and all the players who came out were gracious with their time and interactions with their fans. As for the players, you can’t help but feed off their excitement for the upcoming season. They can’t do anything about the team’s past struggles, but they seemed determined as hell to do something about the future.

To find out more about the Rams and purchase tickets, visit their official website.