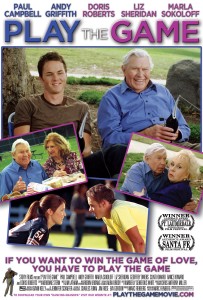 This cute little independent picture has a good idea at its core, but has a bit too much cliché and uneven work by its lead to really stand out above being an average comedy.

David Mitchell is a ladies man and he has a plan and he sticks to it no matter what. Not looking for anything serious and employing elaborate set ups and games to catch his women, Mitchell has found plenty of success with the help of his co-worker. This is a diversion from his dead end job as a car salesman where he is just as successful at selling cars as he is with women but has longed hoped for something more in his life as he was a hair shy of getting his advanced degree only to have to spend the money to put his grandfather in a home as he is the only one left in his family who gives a damn. David pays his grandpa a visit one day to encourage him to get back in the game since his wife/grandma is no longer in the picture having passed on. David invites Grandpa Joe out to the bars with him and he teaches him his tricks of the trade with the ladies. As Joe gets in the game, David meets a girl that might lead him to wanting to get out of it, but he finds it hard to shake his old ways.

Now, Marc Feinberg’s feature debut does have some nice moments and is quite solid across the board whenever Joe is involved with the proceedings. As he re-discovers himself sexually it provides for a number of laughs and awkwardness that work great. The problems with the picture lie with an uneven performance by the films lead David and a weak subplot around his father that never even gets close to getting off the ground. With that said though, David’s scenes do work intermittently, just not as consistently as Joe’s plot.

It doesn’t help either that David’s plot feels a bit tired and unoriginal outside his working with his grandpa. The whole ladies man finding a girl he can’t quite catch has been done time and time again, Feinberg gives a little bit of spin and even a twist here and there but he doesn’t redefine the old trick that the plot is. The final twist to this all is a quite and elaborate and slightly contrived bit of work, but I kind of liked it and it caught me off guard so I guess it worked in the end.

There is also an awful subplot involving David’s dad that goes really know where at all and lacks any emotional punch as it is treated as almost and afterthought and just thrown in there at hopes for a bit of drama. Trimming these scenes, even though we would lose Clint Howard’s work, would have helped push the film forward faster and could have helped the pacing of the film that feels like it drags a bit at the finish.

The actors in the film are decent enough, with Andy Griffith standing out above the pack. Griffith’s Joe is a delight as he chases tail in the old folk’s home and rediscovers himself in more ways than one. His frankness and bit of crude nature provide a majority of the films laughs and one kind of wishes the film was more focused on him and his exploits rather than the other way around. Paul Campbell plays David and his performance is a bit uneven. One, I am not to sure I buy him as a ladies man and he is more convincing as the smart salesman then he is at bagging broads. His performances is also just all over the place with some scenes doing great work and other ones coming off just kind of bad and seeming almost out of character. The female lead Marla Sokoloff does an admirable job coming off as very real and genuine in her performance and doing a better all around job then her male counterpart. She is quite cute and charming as well and makes it easy to see why David would fall for her. The two old folks home love interests for Joe are two seasoned vets as well with both Doris Roberts and Liz Sheridan of sitcom fame having a lot of fun playing “sexy and willing” at there age and working with the very good Andy Griffith.

In the end, Play the Game is an uneven effort that is by no means horrible but not a gem by any standards whatsoever either. Grounded by a mostly solid cast, the films lead is quite a leading man and can’t carry the picture all on his own. Thankfully Andy Griffith picked up a lot of the slack and made this film worth checking out if interested at some point or another in the theater or at home. A bit of trimming and balancing of the two stories might have helped this film settle a bit better if it didn’t drag a bit in the third act. As it stands it is a part inspired, part tired romantic comedy that you can applaud for trying to freshen things up a bit but didn’t quite execute to its fullest.

Play the Game is a C-