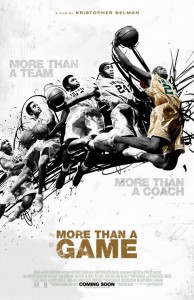 Drake, Eminem, Lil Wayne and Kanye West have all came together in a new collaboration called “Forever.”. The reason for the new song is because of the new LeBron James documentary – “More Than a Game.”

[Drake]
Last name ever,
first name greatest,
like a sprained ankle boy ain’t nothing to play with,
it started off local but thanks to all the haters,
i know G4 pilots on a first name basis,
and your city faded off to brown, Nino,
she insists she got more class, we know!
swimming in the money come and find me, nemo,
if i was at the club you know I ball, Kimo,
drop the mixtape that sh-t sounded like an album
who’d have thought a country wide tour would be the outcome
labels want my name but sign the x like Malcom
everybody got a deal, I did it without one,
yeah n-gga i’m about my business,
killing all these rappers you would swear I had a hit list,
everybody who doubted me is asking for forgivness,
if you aint been a part of it at least you got to witness,
b-tches,

[Kanye West]
I used to have hood dreams,
big fame, big chains,
i stuck my d-ck inside this life until that b-tch came,
I went hard all fall like the … teams,
just so I can make it rain all spring,
y’all seen my story my glory,
i had raped the game young,
you can call it statutory,
when a n-gga blow up they can build statures of me
old money Benjamin Button, whaat, nuttin,
now superbad chicks giving me macLovin,
you would think I ran the world like Michelle’s husband,
you would think these n-ggas would know me when they really doesn’t
like they was down with the old me no you f-cking wasn’t,
your’e such a f-cking loser,
he didn’t even go to class Bueller,
trade the Grammy plaques just to have my granny back,
lyrics courtesy of killerhiphop.com
remember she had that bad hip like a fanny pack,
chasing that stardom would turn you into a maniac,
all the way in Hollywood and I can’t even act,
they pull their cameras out and God damn they snap,
I used to want this thing forever you can have it back,

Ok, hello its da martian,
space jam Jordan’s,
I want this sh-t forever wake and smell the Garden,
fresher than the harvest
step up to the target,
if i had one guess than I guess im just New Orleans,
and I will never stop like i’m running from the cops,
hop up in my car and told my chauffeur to the top,
life is like a f-cking roller coaster then it drops,
but what should I scream for this is my theme park,
my minds shine even when my thoughts seem dark,
pistol on my side you don’t wanna hear that thing talk,
let the king talk check the price and pay attention,
Lil Wayne thats what they got to say or mention,
lyrics courtesy of killerhiphop.com
Im like Nirvada in the middle of the summer,
i’m resting in the lead I need a pillow and a cover,
shhh, my foots sleeping on the gas,
no brake pads no such thing as last,

[Eminem]
There they go, back in stadiums,
it’s shady’s b-tches flow,
nuts they go, macadamia they go sablistic yo,
we can make them look like boso’s,
he’s wondering if he should spit this slow,
f-ck no go for broke,
his cup just wanna throw over, oh no,
he aint had a buzz like this since the last time he overdosed,
they’ve been waiting patiently for Pinnochio to poke his nose,
back into the game and they know,
rap will never be the same as before,
bashing in the brains of these hoes,
and establishing a name as he goes,
the passion of the flame is ignited,
you can’t put it out once we light it,
this is sh-t exactly what the f-ck i’m talking about when we write it,
you dealing with a mutual villain,
lyrics courtesy of killerhiphop.com
so stay inside of the boots you spillin
and spit true feelings, til our tooth fillings come flying up out of our mouths
now rewind it
payback muthaf-cka for the way you got at me so how’s it taste
when I slap the taste out your mouth with the bass so loud that it shakes the place,
i’m hannibal lecters son just in case your thinking of saving face,
you aint gonna have no face to save by the time Im through with this place,
so Drake….

Eminem, Young Money and Kanye West — that’s what you call an O.D. of talent.

The collection of MCs has aligned for a song called “Forever,” from the upcoming LeBron James documentary “More Than a Game.” This is obviously the biggest hip-hop collaboration since last year’s “Swagga Like Us,” featuring Kanye, Wayne, Jay-Z and T.I.

“Forever” originally hit the mixtape circuit awhile ago with Drake, Wayne and Nut Da Kid. According to Young Money’s Mack Maine, the track has been retooled and rebooted with Drizzy, Weezy and the two international superstars.

Sometimes when a lineup is this strong, a song can’t deliver, but we’re betting the bank that these four won’t disappoint. Kanye has been a beast with his guest appearances lately (especially that verse on Jay-Z’s “Run This Town”), Weezy is always a killer, and Drake would be a fool if he doesn’t come with some classic lines. It’s another golden opportunity for the 22-year-old Canadian to get major shine. He has the best looks lately.

Eminem, he’s the wild card. Off reputation alone, he automatically ups the ante. For so many years, he’s been one of the standard-bearers for quality of music and success, so his presence just about assures that everyone’s bars will be up to par.

Myself and my partner (the b-day boy!!!!) Rahman Dukes sat down, as we do every day, and kicked it about the song. Each of us had ideas about whose verse would steal the show. Check out our conversation, then let us know your prediction for hottest verse on the song.