Speilberg to Adapt another Crichton Novel 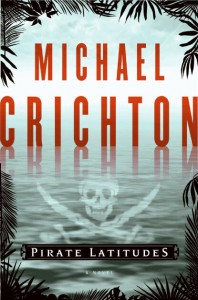 Well, seeing as Steven Spielberg has had resounding success with his other Crichton based films, it is no surprise that he is pushing to develop the late author’s posthumous book, “Pirate Latitudes’.  Spielberg is apparently teaming up with writer David Koepp once again, who did the scripts for Jurassic Park and The Lost World.

Synopsis: The Caribbean, 1665. A remote colony of the English crown, the island of Jamaica holds out against the vast supremacy of the Spanish empire. Devoid of London’s luxuries, Port Royal, its capital, is a cutthroat town of taverns, grog shops, and bawdy houses. In this steamy climate, life can end swiftly by dysentery—or dagger. But for a daring soul like Captain Edward Hunter, this wild outpost in the New World can also lead to great fortune, if he abides by the island’s code. In the name of His Majesty King Charles II of England, gold in Spanish hands is gold for the taking and the law of the land rests with those ruthless enough to make it.

Word in port is that the Spanish galleon El Trinidad, fresh from New Spain, is awaiting repairs in nearby Matanceros. Heavily fortified, the impregnable Spanish harbor is guarded by the bloodthirsty Cazalla, a favorite commander of King Philip IV. With the Jamaican governor’s backing, Hunter assembles a crew of ruffians to infiltrate the enemy island and commandeer the galleon and its fortune in Spanish gold. The raid is as perilous as the bloodiest tales of Matanceros legend, and Hunter will lose more than one man before he makes it onto the island’s shores, where dense jungle and the firepower of Spanish infantry stand between him and the treasure.

With the help of his cunning band, Hunter hijacks El Trinidad and escapes the deadly clutches of Cazalla, leaving plenty of carnage in his wake. But the danger—and adventure—are only just beginning. . .

Stacey Snider, Dreamworks CEO and partner to Spielberg in Dreamworks says, “”It’s a mission movie, and we see it through the prism of what it might have been like to live on the island during that time.”

It will be interesting to see how well this one plays out in theaters. Pirate movies do not always equal success, but with the behemoth that is Pirates of the Carribean, things might have changed. Also, you attach Spielberg to any project and watch its outlook soar. There is no word on what Spielberg’s role in the final film will be. Spielberg has a handful of other projects right now, and if I had to guess he will only be exec producing this one.