This might make me seem a bit callous, but this really sounds like a train wreck of epic proportions. Al Gough and Miles Millar, famous for their work on the sometimes awful and sometimes supremely entertaining CW show, Smallville, have teamed up with Michael Bay to do an adapation of James Frey’s “I am Number Four”. 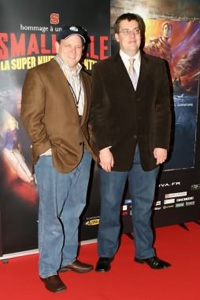 DreamWorks has set “Smallville” alums Al Gough and Miles Millar to pen “I Am Number Four,” the screen adaptation of the James Frey and Jobie Hughes novel.

Michael Bay will produce and possibly direct the pic. Chris Bender and JC Spink of BenderSpink will be executive producers.

HarperCollins Children’s Books is publishing the book, about a group of nine aliens who flee to Earth, disguised as teenagers, when their home planet is destroyed.

Gough and Millar created the long-running WB/CW drama series “Smallville,” and their feature scripting credits include “Spider-Man 2” and “The Mummy: Tomb of the Dragon Emperor.” They most recently produced “Hannah Montana: The Movie” and are producing “Quartermain” for DreamWorks.

The studio acquired “I Am Number Four” just as Bay’s “Transformers: Revenge of the Fallen” began its record-breaking opening weekend (Daily Variety, June 29). The book deal put Bay back in business with DreamWorks principals Steven Spielberg and Stacey Snider, who were instrumental in the development of the “Transformers” franchise. DreamWorks co-presidents Holly Bario and Mark Sourian will steer the potential franchise.

As a huge comic book geek I sometimes feel very affronted to the Smallville series. They turned one of the most iconic characters in comic book history and made him into Dawson from Dawsons’ Creek with superpowers. I can’t say there hasn’t been a few episodes that haven’t entertained me though. Overall, the show is laughably bad at times, with transparent villians. They have changed the back story of Superman so much that it hardly seems to be in line with what the character is all about. However, they do have a credit on the brilliant Spider-man 2 which was the best of the series so far. That film went through many rewrites, so who knows how much of what is in there is theirs.

Now, Micheal Bay is another story altogether. Sci-fi is his niche, but he doesn’t create good sci-fi. His movies are more or less explosions and hot girls with some sci-fi filler. This might make me sound like some pasty geek who sits behind his computer all day, but I really do think we can have both. Like always I’ll hold judgment until I see a final project.