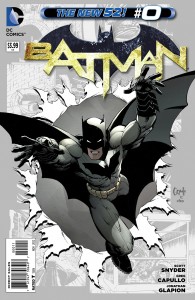 It’s been a year since the New 52 reboot, and DC has now launched “Zero Month” – every title is getting a Zero issue.  The issues tell origins and early stories of every hero and team in the New 52.  Batman is no different.  The latest issue of the soon to be legendary run of Scott Snyder and Greg Capullo tells the tale of a “Pre-Batman” Bruce Wayne setting up shop in Crime Alley and the debut of the Red Hood Gang.

The story opens on a newly renovated Gotham National Bank.  In a scene very reminiscent of The Dark Knight, we meet the Red Hood as he and his gang plan to rob the bank.  For anyone who knows comic history, The Red Hood goes on to become The Clown Prince of Crime himself, The Joker.  In the scene, The Red Hood tells one of his henchmen to “put down” the bank manager.  The henchman cracks the manager in the skull with his gun.  It’s here that we get to see just how smart and psychotic The Red Hood is as well as how clumsy and reckless the young Bruce Wayne is.  The Hood quickly notices the henchman is using the wrong hand and must not be who he appears to be.  When it becomes obvious the infiltator has no escape, he pleads that the hostages not be harmed.  He ultimately learns the Red Hood has already fed the hostages poisoned cake.

The henchman, who we all know is Bruce Wayne, makes his getaway.  Bruce races through the sewers to a brand new Batcave.  He’s interrupted by Lt. Jim Gordon on his way to the roof.  Gordon, in not so many words, tells Bruce that if he is this new vigilante running around Gotham, he needs to stop before it’s too late.  One of the things that I loved about this confrontation was the sense of urgency.  Just before seeing Gordon, Bruce had thrown a Batarang with a timer.  The whole time Bruce and Gordon were talking, the timer was counting down.

I actually enjoyed the back-up story more than the main feature.  The back-up shows all of Batman’s sidekicks seeing the Batsignal for the first time.  We see a young Tim Drake showing off his detective skills by figuring out the headmaster of his school has been embezzling funds.  We meet Jason Todd, who is the second man in a stick-up that goes wrong.  There’s Dick Grayson who uses his acrobatic ability to stop a man from stealing a woman’s purse.  Finally, we see Barbra Gordon standing with her Dad on top of the Gotham Police Department.

What I really dug about this issue was…..well, everything.  I liked seeing Bruce finding his way.  He is generally portrayed as a confident, very smart, leader.  It’s not very often you get to see him in a situation that he can’t handle.  I also loved seeing the different sidekicks and learning about their backgrounds. Tim Drake is the smart, quick on his feet, overly confident kid.  Jason Todd is the street kid who does what he has to do just to get by, but his heart is in the right place.  Dick Grayson is the cocky athlete, and Barbra Gordon is the cop.

Scott Snyder, James Tynion, Greg Capullo, and Andy Clarke all put out a perfect Zero issue – an “untold” tale that sets up future events.  Will we see The Red Hood or The Joker later? I think we all know that we will.  I did find it interesting that there was no mention of the current Robin, Damien Wayne.  I’m not sure if they’re going to touch on his origin in any of the other Batman books, but I found it odd that they didn’t mention him at all.

Overall, this book is a great example of what happens when there is passion and dedication to a character.  It’s pretty obvious that all of the creators involved are having a great time on this book.