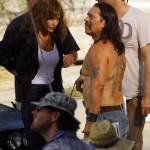 Check out photos from Robert Rodriguez’s upcoming movie “Machete,” starring Jessica Alba, Danny Trejo. The character of Machete is based upon the short trailer that Rodriguez filmed for “Grindhouse.” It was a hilarious trailer, with such quotes as “He knows the score. He gets the women. And he kills the bad guys.” During the short clip, you basically see Machete kill a bunch of people and make out with naked women. Danny Trejo, who has been in almost all of Robert Rodriguez’s movies, will be returning to play the part of Machete. The film will be released straight to DVD.

Check out photos from the set of Robert Rodriguez’s “Machete”

Watch the original trailer for “Machete” from Grindhouse —