And boom goes the dynamite.

2010 opening day was, on the whole, one of the more interesting opening days in years. No no-hitters or anything like that, just pure, unadulterated, baseball.

The Cardinals won their first season opener in four years, winning 11 to 6 over the Reds. Overall, it was a good first win for the Birds.

Some notes on the Cardinals game and from around the league:

– Yadier Molina still looks like he’s hurting a bit, but obviously it hasn’t affected his hitting. Yadier hit his first career grand slam in the ninth to seal the deal.

– Carpenter wasn’t especially sharp, but he was effective. Once again, the issue regarding mud on the balls has arisen.

What’d you just ask? Ew. Perv. No. For the uninitiated, before each game, the baseballs that are to be used are rubbed down with a specific mud to allow the pitcher a better grip. Last year, Carpenter complained the balls were too slick. He wasn’t alone; John Smoltz said the same thing. And now the issue has arisen once again. Whether you’re a man or a woman, I think we can all soundly agree, it’s a problem when you can’t get a grip on your balls. 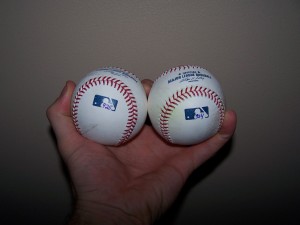 What's everyone looking at?

– Colby Rasmus did a terrific Edmonds impression, pulling a Scott Rolen home run back back over the fence. He also crushed a bomb. Perhaps I was wrong about his year.

– The defense looked a bit shaky at times otherwise. David Freese, whose defense is not expected to be a forte, committed an error, as did Skip Schumaker.

– The bullpen struggled a bit as well, but don’t lose faith yet. It’s a lot different pitching with a huge lead compared to pitching with a one or two run lead. When I was mowing them down in my grade school CYC league, I tended to be more focused when we had a smaller lead. Granted, I was going through puberty and probably focused on the girls in the stands. But I was focused.

– Speaking of prospects, Jason Heyward made his debut with the Braves. There hasn’t been this much excitement over a rookie after spring training since, well, Pujols. And what’d Jason do his first at bat? Three run home run off Carlos Zambrano.

– Mark Buehrle made a sick defensive play yesterday. Words don’t do it justice. Watch it. http://www.mlb.com/video/play.jsp?content_id=7282679

– In other St. Louis sports, the trade of McNabb to the Redskins seemingly all but assures us that the Rams will take Bradford with the number 1 overall pick.

– The Blues continue to play impressively, winning 2-1 last night. If only they’d played with this intensity at home all season, they’d have locked up a playoff spot a while ago.