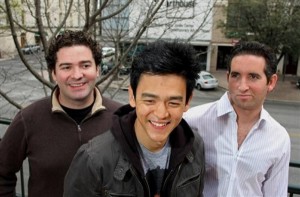 The title is a little misleading, with all the straight to DVD releases in the American Pie franchise I believe we are actually up to American Pie 59 to the fourth power. Although, my math could be wrong. Regardless, Harold and Kumar writers and directors, Jon Hurwitz and Hayden Schlossberg are slated to direct the latest American Pie effort to come to theaters. The downside to this is that they won’t be directing the upcoming Harold and Kumar Christmas sequel coming out, but they did pen the script.

Though no deals have been made, the original cast is supposed to be reunited for American Pie 4. Hurwitz and Schlossberg are currently writing the script for the film.  They are handing the directing reigns over to Todd Strauss Schulson for A Very Harold & Kumar Christmas.

So, jumping from one silly franchise to another? As sad as it seems, Harold & Kumar actually seems like the more financially viable of the two. Although, that is mainly due to the American Pie franchise becoming so watered down with a slew of horrible direct to DVD releases.