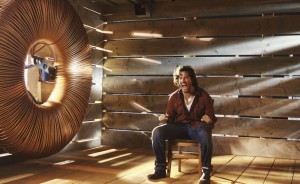 Desmond is back and we get our second single character episode in three weeks and the results help explain the sideways world and put into motion the final pieces of the final season.

The episode opens on the island, a drugged out Desmond awaking from a medically induced comma is dragged to a electromagnetic device that accidentally fried one of Widmore’s men but they claim will not effect Desmond in any way shape or form.  Widmore says they need to test Desmond to see if he in fact can not be harmed by electro magnetic events and if he isn’t he will be instrumental in Widmore’s plan and will have to make a sacrifice as part of said plan.  When the magnetic event is flicked on, Desmond transports into his Sideways self and we catch up to him in the luggage lobby of the airport.

In Sideways world Desmond is single, loved by Widmore, and has no idea who Penny is.  Widmore dispatches Desmond to pick up Charlie from jail because he is supposed to perform with Widmore’s brilliant pianist of a son, Faraday, at a charity event run by Eloise Widmore.  Charlie isn’t very cooperative though and keeps trying to tell Desmond he needs to show him something, something he experienced on 815 when he was dying, the clarity of true love.

In an attempt to show Desmond the light, so to speak, Charlie crashes them into a harbor and when Desmond tries to rescue Charlie from the car he gets a flash from the Island time line, the Not Penny’s Boat moment in particular, and this sends Desmond down a road on what this all means.  Desmond gives up on Charlie and goes to break the news to Eloise who takes it well but goes off when Desmond over hears Penny’s name on the guest list.  Eloise tries to tell Desmond to let it go and that he got the life he always wanted so he should forget about this feeling he is having.

Desmond leaves the event but is intercepted by Faraday who tells him about this longing he has for a museum worker and how after he saw her he woke up and wrote down an advanced quantum mechanics equation that could only have been done by someone trained in the science for years.  This Faraday is a musician, not a scientist as we have known him, but he and his friends have figured out that some electro magnetic event/catastrophe could have sent them to this world which Daniel claims isn’t real/right.  As a send off Faraday gives Desmond an opportunity to meet his half-sister Penny which happens to be the stadium that Jack and Desmond met in at in the island timeline.  This time Penny is running the stadium and Desmond approaches her and introduces himself which in turn sends him back to his Island self post electro magnetic experiment.  Desmond instantly signs up for Widmore’s plan upon awaking from his latest mind trip, in contrast to trying to bash Widmore’s head in when woke up from his sedated comma, but when Desmond and a group of Widmore lackeys is heading back to who knows where, they are intercepted by Sayid who requests Desmond to leave Widmore and his dangerous group of people.

In one last scene we see Desmond lying passed out on the stairs of the stadium the instant after he shook her hand and went back to the Island world.  He asks her out for coffee and upon agreeing Desmond gets back into his company limo and asks his driver, George from the freighter, to get him a manifest of 815’s passengers; he has to show them that this world isn’t what it seems.  Bullets:

-I know a lot of people will continue to complain that we need more answer’s, blah, blah, blah, I say shut it and enjoy the ride

-This Sideways world seems to be giving everyone an apparent happy ending though not the true happy ending they deserve; especially when it comes to their true loves

-I miss Faraday; I wish we got more of him this season

-I need to watch this again, but Widmore talks about his son dying, Faraday, for the Island will we learn more of this?

-Eloise again seems to know more than she is letting on, is she one of the movers for these castaways alternate lives?  Is she like Desmond?

-Ah Penny and Desmond, again, not enough of them and if they don’t get back together in both time lines I am going to be pissed.

-What is Desmond’s plan from here on out in both timelines?  How is he going to show these people the right path?

-Also on the Island, did we miss a scene that had Widmore telling Desmond what to do before Sayid got to him.

-What will the consequence be of Desmond telling everyone about this world falsities?  Will it affect that Island?  Smokey? Time will hopefully tell.

-And which side is Widmore on damn it.

-Also, anyone else get a Jurassic Park vibe with the Magnet Box?

-Was the nuke Faraday was talking about the cause of this timeline or something else?

And with that I am to tired to think, another great episode and one that will play even better once the series is over; welcome back Desmond!