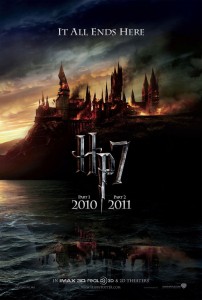 With the release of the official trailer last week (watch the trailer here), the press bonanza has begun for Harry Potter and the Deathly Hallows. The movie stands to be one of the biggest releases in a franchise ever, and will probably prompt the amount of fanfare given only to a select few movies.  It is hard to say if splitting the final part into two films will be helpful or harmful, but as long as they stick to the storyline, WB has an incredible chance to turn some big profits.

My one and only complaint against all this coverage is that right now they seem to be giving away too many essential parts. There are a few glimpses of final events that take place towards the end of Part 2. For those who haven’t read the books, the twists and turns at the end of a Potter book/movie always have a grand payoff. Let’s hope WB’s marketing team doesn’t get a little overzealous and reveal too much in promotional materials.