“Harry Potter and the Deathly Hallows” Official HD Trailer – Get Ready for Parts 1 and 2! 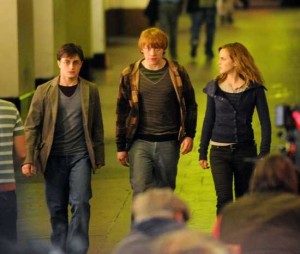 To say I geeked out over this trailer is putting things lightly. After getting a quick peek at the upcoming Harry Potter and the Deathly Hallows at the MTV Movie Awards, (watch the clip here) I’ve been chomping at the bit wanting more footage.  So, did it meet my high expectations?

Yes and no. The trailer is amazingly epic, but at the same time I think they might be revealing a bit too much in the initial trailer. Sure, the majority of people watching the movies have most likely read the book, but for the handful that haven’t they are ruining a chance to experience the film solidly for the first time. As a fan though, it is exhilarating seeing scenes you read expand into epic sets on the big screen.

Needless to say, this looks like it is going to be a very emotional end to a fantastic franchise series. WB could have tossed anything out there to cash in on the success of Harry Potter, instead they have given us a number of high quality adaptations that stand on their own well.