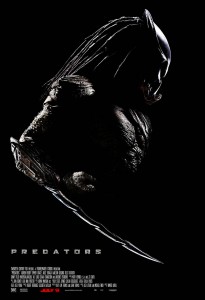 Predators begins (brace yourself, I’m about to get all fancy on ya) in medias res with our hero (Adrien Brody) awakening at 10,000 feet in free fall. Upon landing (he had a parachute) he discovers that he’s been dropped into a remote locale and he’s not alone. Finding themselves in a similar position are a collection of military members and criminals; most representing a different country and/or ethnicity (though they all conveniently speak English). Confusion mounts as the group comes to the slow realization that the jungle in which they find themselves has incongruous vegetation and topography. It isn’t long before they grasp that they’ve been abducted and dumped onto an alien planet in order to be stalked and slaughtered by an as yet unseen (by them) hunter. And fear not, none of this information really qualifies as “spoiler alert” worthy since it’s all clearly spelled out in the trailer.

The film is not a reboot or “reimagining” (if you prefer the latest Hollywood parlance). This is a good ol’ fashion sequel, even though no one from the cast of Predator or Predator 2 makes an appearance. But the central conceit of the film smartly sidesteps this issue. Though Robert Rodriguez conceived the original premise for the film 15 years ago while working on Desperado, a story that revolves around a group of strangers thrown in an “alien” environment fighting against an unseen enemy while trying to find a way out is, today, remarkably reminiscent of Lost. Or perhaps Cube if you prefer your existential dramaturgy a bit more “art house.” However, mix in the ethnically diverse cast and the jungle setting and Lost will most certainly be what most filmgoers will be thinking of, though the film has little of Lost’s more literary aspirations.

Brody is admittedly an unlikely action hero. (If someone had told me that The Pianist could one day be an action figure, I’d have thought they mispronounced “pianist” and that the toy in question would be *ahem* battery operated.) But he acquits himself nicely, all things considered. Regrettably he does rely a bit too much on a gravelly, tough-guy whisper that Christian Bale made famous in Batman Begins (though thankfully, he’s forgone the lisp that so often made Bale sound like Clint Eastwood using baby talk).

Predators is on par with, and arguably better than, Predator 2. And it’s light years beyond the derisible Alien vs. Predator films. The picture returns the franchise to its roots by depending more on suspense than special effects (though there is no shortage of the latter). Unfortunately, an exciting opening and smart set-up are marred by the film’s unrelenting predictability. Character story arcs repeatedly play out exactly as you would expect; even the ones that have a “twist.” As the film draws to a close it becomes increasingly dark; not in a thematic sense but literally. Light slowly drains from the film, obscuring much of the action. In a climactic fight scene between two Predators, it’s practically impossible to tell one from the other. (Is that racist?) Ultimately the film delivers on its B-movie premise. Is it predictable? Yes. Is it high-art? Don’t be silly. Your enjoyment level will most likely be directly disproportionate to your expectation levels. And I certainly brought very little to the equation.