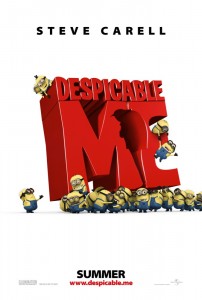 In the new animated feature Despicable Me Steve Carell voices Gru, a super villain so reprehensible that he delights in making balloon animals for children solely so he can then pop them. However, Gru’s spotlight is being usurped by Vector (Jason Segel) a younger super villain who has exploded onto the scene by stealing one of the pyramids. In order to regain supremacy, Gru devises a new and bigger plan. He will steal the moon. But first, he must obtain the shrink-ray that’s already in the possession of Vector. In an attempt to infiltrate Vector’s lair, Gru adopts a trio of orphaned sisters: Margo (Miranda Cosgrove), Agnes (Elsie Fisher) and Edith (Dana Gaier). The film toggles between Gru’s brinksmanship with Vector and his increasing fondness (much to his own consternation) for his ill-gotten adopted daughters.

As the film progresses, there is never any real doubt as to where all this is leading. Gru’s growing affection for his adopted daughters will, of course, turn to love. And this love will, of course, cause him to turn over a new leaf. And while the film’s predictability does detract from its charm down the stretch, well…it’s pretty damn charming. The picture’s largest flaw is that at times it’s more “clever” than it is “funny.” Too often I found myself nodding admiringly at its ingenuity, when I should have been laughing.

What makes the film work is Carell’s performance as Gru. Striking the perfect balance between evil mastermind and hapless hero, Gru’s dastardly deeds manage to be villainous without ever being truly menacing. Carell manages to keep Gru ominous but playful. It’s this trait, combined with his Freudian/Oedipal backstory, which allows us to root for a character that is ostensibly the “bad guy.” But the filmmakers go to great pains to ensure that Gru’s evil plans are never too “evil.” Super villains in this world, more akin to those found in comic books from the 1950s, are more apt to steal than kill. And the things they steal are ludicrous: a pyramid, the Statue of Liberty, etc. The comical nature of their grandiose schemes is an effective, not to mention welcome, way of removing our reservations about rooting for the villain.

Aiding in the softening of our antihero is his collection of minions – tiny, yellow oblong creatures that speak in high-pitched gibberish. The minions are comically inept and quickly engender audience affection. They dutifully execute Gru’s schemes, not out of malice but out of devotion to their leader.

Despicable Me is the first CGI feature from Universal and overall it’s a strong outing. It was filmed on a budget (compared to DreamWorks and Pixar), but you’d never know by looking at it. It’s an amiable film that wins over an audience through sheer force of will. While it doesn’t offer the pathos of Toy Story 3 or the joke quotient of Cloudy with a Chance of Meatballs, it manages to land nicely between the two.

On a scale of 1 to 10, with 10 being The Incredibles and 1 being The Three Robonic Stooges, Despicable Me gets a 7.