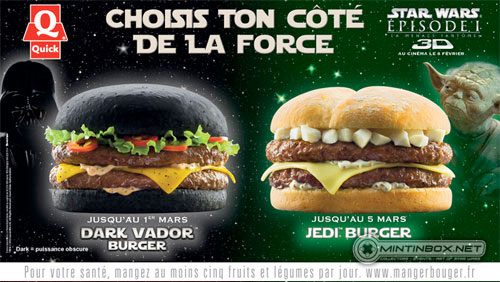 "Dark Vador" vs. the Jedi. Image via http://www.seriouseats.com.

Your immediate response to the headline and ad above should be as follows:

The silliest Star Wars film of all time, The Phantom Menace, will be re-released in 3D in France (and elsewhere) next month, and Quick – the Official French Pimp of Star Wars Meat Tie-Ins – will celebrate by offering consumers a befuddling sandwich with a curious spelling. The “Dark Vador” burger will feature two potentially all-beef patties, cheese, lettuce, tomatoes and mystery sauce on a black bun. A black bun! The Jedi burger that opposes it doesn’t look as cool, but it appears to have…teeth? Maybe it’s part Rancor?

The Jedi burger has another enemy, though, and that’s the “Dark Burger,” which is all about Darth Maul. Because when you think of Darth Maul in burger form, you obviously think of seeds on your bun and extra cheese. (See ad below)

For the record, the French ads read “Choose your side of The Force” at the top and “For your health, eat no less than five fruits and vegetables per day” at the bottom. I’m glad Quick is looking out for the Frenchies.

Would these ads for Force-laden sandwiches entice you to spend $16 to see a 3D version of The Phantom Menace here in the United States? Lettuce (Ha!) know in the comments. And while you’re considering 3D’s worth, don’t forget to enter our contest to win tickets to Beauty and the Beast in 3D! 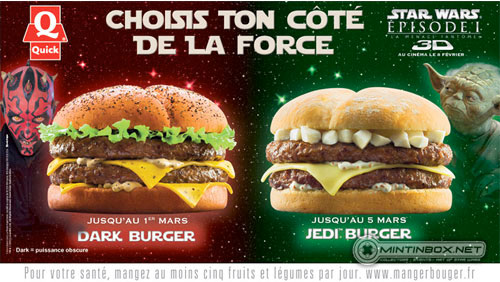 Darth Maul vs. the Jedi. Image via http://www.seriouseats.com.