Relativity’s Act of Valor Gets Seal of Approval From

Studio Partners with Clancy on Groundbreaking 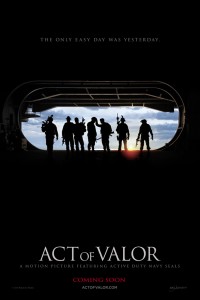 (Beverly Hills, Calif.) January 5, 2011– Relativity Media is proud to announce it has partnered with highly-celebrated, best-selling author Tom Clancy on its heart-pounding Navy SEAL action-thriller Act of Valor and an accompanying novelization of the film’s screenplay. This marks Clancy’s first time to present a novelization of a feature film not based on his own original work.

The film’s novelization, “Tom Clancy Presents Act of Valor” written by Dick Couch and George Galdorsi, based on the screenplay by Kurt Johnstad, will be released in paperback by Clancy’s long-time publisher, Berkley Books and Brilliance Audio will make the audio version available  on January 10, 2012.

In theatres February 24, 2012, the Bandito Brothers’ film Act of Valor stars a group of active-duty Navy SEALs—not actors—along with Roselyn Sanchez, Alex Veadov, Jason Cottle and Nestor Serrano in a powerful story of contemporary global anti-terrorism. “These men are American heroes,” said Clancy, “and when I heard about this project, I wanted to get involved and use all the resources available to me to make it a success.”

Clancy’s name has become a globally recognizable brand for not only his own military–thriller novels, but for non-fiction books, movies and video games.  The prolific writer has written 26 books in 20 years, each a best-seller, and is one of only a few authors ever to have sold two million copies on a first printing, along with John Grisham and J.K. Rowling. Some of his most notable works include but are not limited to “The Hunt For Red October” (1985), “Patriot Games” (1987), “Clear and Present Danger” (1989) and “The Sum of All Fears” (1999). Most recently, Clancy released two novels in 2011 “Against All Enemies” and “Locked On”. Motion pictures based on his novels have grossed over a billion dollars worldwide, and his exclusive video game partnership with Ubisoft has thus far resulted in nearly sixty million game sales in dozens of countries. Clancy received the Alfred Thayer Mahan Award for Literary Achievement from the Navy League of the United States in 1990.

Clancy’s passion for Naval history, coupled with his blending of realism, intricate plotting, suspenseful action, and authenticity in story-telling, makes him a natural fit to get behind Act of Valor. An excerpt of Clancy’s foreword for the “Act of Valor” novelization is below:

The events in this book and movie may not always be easy to read about or watch, but it is important for us to get a glimpse into the lives of these courageous Americans, and a deeper appreciation for sacrifices they make for us.

We have an obligation to honor the SEALs and their families—not just in the event that we are fortunate enough to meet any of them one day, but by living our lives to the fullest, enjoying and preserving the liberties afforded to us because of their work.

Relativity’s President, Theatrical Marketing, Terry Curtin said, “Having Tom Clancy come on board in partnership with Act of Valor is hugely valuable for the project. The association with his name, which embodies the highest standards in the military-action entertainment genre, speaks to our film’s authenticity.”

Produced and directed by former Baja 1000 champion Mike “Mouse” McCoy and former stuntman Scott Waugh, Act of Valor goes deep into the secret world of today’s most elite and highly trained group of warriors. When the rescue of a kidnapped CIA operative leads to the discovery of a deadly terrorist plot against the United States, a team of SEALs is dispatched on a worldwide manhunt. As the men of Bandito Platoon race to stop a coordinated attack that could kill and wound thousands of American civilians, they must balance their commitments to country, team, and their families back home. Inspired by true events, the film combines stunning combat sequences, up-to-the minute battlefield technology and heart-pumping emotion for the ultimate action adventure.

For more information about the film please visit www.actofvalormovie.com.

Relativity Media is a next-generation studio engaged in multiple aspects of entertainment, including full-scale film and television production and distribution, the co-financing of major studio film slates, music publishing, sports management and digital media.  Additionally, the company makes strategic partnerships with, and investments in, media and entertainment-related companies and assets.

Relativity also owns and operates Rogue Pictures, a company that specializes in films targeted to the 13-25 year old audience, and RogueLife, Relativity’s digital studio which is developing original content for the Web and creating sustainable online platforms and communities. RelativityREAL, Relativity’s television arm, has 67 projects in production, including 17 original series that are currently airing or will air in the upcoming television season including Police Women for TLC, Coming Home for Lifetime and The Great Food Truck Race for Food Network. For additional information, please visitwww.relativitymedia.com.