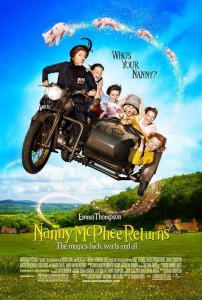 I went into Nanny McPhee Returns with a negative attitude. I will admit it. I never saw the first one because I thought it looked like a dumb, cheesy kid’s film. So I assumed this would be the same. Secondly, and more importantly, I was under the impression that Emma Thompson had declined to reprise her role as Professor Trelawney in the last installment of the Harry Potter franchise as a result of this film. This was a big disappointment for me. But don’t fret readers. I write this review with two positives: 1.) I enjoyed the Nanny’s second outing and 2.) Thompson was able to film her Harry Potter scenes.

Nanny McPhee appears at the door of a harried young mother, Mrs. Isabel Green, who is trying to run the family farm while her husband is away at war. But once she’s arrived, Nanny McPhee discovers that Mrs. Green’s children are fighting a war of their own against two spoiled city cousins who have just moved in. Nanny McPhee uses her magic to teach her mischievous pupils five new lessons.

I am certainly not the target audience for this film, but it is hard to not like this film. The cast is outstanding featuring Maggie Gyllenhaal, Emma Thompson, Maggie Smith, Ewan McGregor, and Ralph Fiennes among many other talented performers. These performances (especially Maggie Smith’s) really made this film rise above other family films for me. I was worried that the film would be too kid-friendly, and while you do have pigs doing synchronized swimming, it never gets to be too much. Overall, I felt that the special effects were pretty good. Definitely better than most films in this genre. I also liked that I did not have to see the first film to enjoy this one.

In the end, I think the fact that I went in to the movie not wanting to like it helped me enjoy the film more. But I still feel that most people would enjoy this film. The kids in the theater appeared to be having a good time, and I feel that this is a film that parents will enjoy more than most family films. As long as you are going with your kids and keeping the type of film in context, then I think it is certainly worth an enjoyable trip with the whole family.