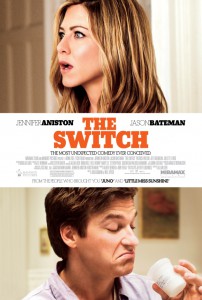 Jason Bateman and Jennifer Aniston star The Switch, Hollywood’s latest attempt to revive the flagging romantic-comedy genre. With the exception of (500) Days of Summer, it is a formula that has been sorely lacking the last few years; relying increasing on wacky high-concept premises (“She’s the city’s first female firefighter; he’s an arsonist with a heart of gold”) instead of solid story or actors with good chemistry. The Switch, at first blush, would appear to be more of the same. Bateman plays Wally Mars, a neurotic stock-broker type who is in love with his best friend Kassie (Aniston). Wally is crushed when Kassie, hearing her biological clock ticking, decides to have a baby (via artificial insemination) not with him but with a stranger. Due to some zany plot contortions (more on that later), Wally switches her sperm donor’s sample with that of his own and, unbeknownst to Kassie, becomes the father of her baby. Kassie, upon becoming pregnant, promptly leaves town to raise the baby in a more “family-friendly” environment. She returns 7 years later with her child in tow, lured by a dream job in the big city.

The film goes to great lengths to soften the blow of the film’s central conceit. The idea of swapping someone else’s sperm for your own is a repugnant act; tantamount to rape-by-proxy. The film attacks this problem on two fronts. First, it casts an actor that oozes likability. [Editor’s Note: “Oozes”? Really? Is that the word you want to go with here?] And second, Wally’s actions take place not only under the influence of alcohol but of some sort of pill that’s coyly (and vaguely) referred to as “herbal”. This mythical mixture creates a level of intoxication so intense that seven years later he still has no memory of the deed. It’s not until he meets their son Sebastian (Thomas Robinson) and discovers they share the same neuroses and gloomy outlook that he begins to remember what he’s done.

The Switch, in a way, is two movies at war with itself: an off-the-wall sex comedy and a touching story of a high-functioning special-needs adult helping his high-functioning special-needs son learn to navigate the world. Bateman’s performance is a strong though subtle one. This isn’t Rain Man and he wisely doesn’t play it that way. Wally and Sebastian seem have some form of Asperger’s or, perhaps more accurately, Sensory Processing Disorder. The movie never addresses these issues from a medical standpoint but it handles them deftly, especially considering the film’s premise. Sebastian, with his penchant for collecting picture-less picture frames, laser like focus on specific topics and sensitivity towards sound, casts a somewhat sad yet adorable shadow. Robinson does a solid job of being both mystifying in his reaction to the world and mystified by the world’s reaction to him. He walks a fine line; being cute without ever crossing over to cloying.

Aniston and Bateman share an effortless chemistry. Perhaps it’s their shared background in sitcoms but they fall into an easy and natural rhythm. Make no mistake, the film is formulaic. It is, after all, a rom-com. But it’s well executed even if its tone is a bit wobbly due the incongruent storylines. The film truly shines when it focuses on Wally’s relationship with Sebastian instead of Kassie. But, flawed though it might be, it’s infinitely strong than vast majority of romantic comedies Hollywood has been churning out as of late.