Movies Based on TV Shows Featuring Their Original Casts, In Honor of ‘Star Trek Into Darkness’ 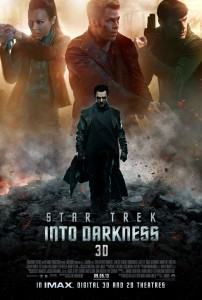 This week sees the release of the Star Trek Into Darkness. Unless you’ve been living in cave (instead of your parents’ basement) then you know that Star Trek is cult show from the ‘60s that just keeps chugging along. Lasting for three seasons (1966-1969) the series was revived theatrically in 1979 due the success of Star Wars. These days, with a few notable exceptions (The Simpson, The X-Files, Firefly), most big-screen adaptations of TV shows are reboots. And while the current incarnation of Star Trek is a reboot (and a damn fine one at that) originally it was a continuation of the series featuring the same actors.

But it wasn’t the first time Hollywood had tried this nor would it be the last. It was, however, the most successful. This got me thinking about other times we’ve seen small-screen stars try to make the jump to the big-screen. So here’s your list… Movies Based on TV Shows featuring their Original Casts.

While it became popular in reruns, The Munsters was never much of a hit when it aired originally. It only ran for two season and didn’t even break the Top 30 its second season. Their debut as a feature film came a mere month after the airing of (what would be) their last episode. The original cast returns with the exception of Debbie Watson replacing Pat Priest in the role of Marilyn (but that was almost a tradition at this point since she had replaced Beverley Owen).

At first blush you might have assumed the film was about The Munsters returning to Transylvania. However, this isn’t “Munster Go Home” it’s “Munster, Go Home”. Damn you, comma! No, apparently sending The Munster to the epicenter of the Universal Monsters was deemed too interesting. Instead the film’s story was standard sitcom fare. Herman inherits a castle. His cousins, feeling that they’re rightful heirs, attempt to convince them that the manor is haunted but if you’re a Munster that’s actually a net-positive.

The film’s biggest selling point seems to be that you finally get to see The Munsters in glorious Technicolor. And I’m sure in 1966 that would have been quite enticing. But ultimately the film was deemed such a failure that it scuttled a third season and prevented a theatrical foray from our next TV show.