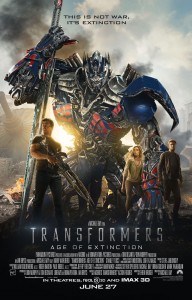 Michael Bay is a bit of a conundrum. His films are consumed greedily by audiences, and near universally panned by critics. Even the critics who give his films a pass do so begrudgingly.  Transformers: Age of Extinction could get a 0% on Rotten Tomatoes and it will still likely be one of the biggest releases of the year, if not the biggest.  Audiences are enthralled with Bay’s explosion filled visions, and are happy to ignore many of the lesser sins of storytelling to get their action fix.  Bay’s films are pure escapist fantasy and aren’t meant to be films for the artistic elite. Despite the overall silliness, I loved the first Transformers film. It had a lot of heart, and numerous thrilling action set pieces which appeared to my inner child that lives a bit too close to the surface.  I found myself bored by the second film, and saw a slight bit of redemption with the third film in the series.  My hope was that the series could reach the heights of the first film, and ditch some of the baggage brought on in the first trilogy. As I quickly found out, it was the hope of a fool.

Transformers: Age of Extinction takes place 5 years after the events Transformers: Dark of the Moon. It’s a bleak time that sees government operatives hunting both Decepticons and Autobots alike.  After the destruction of Chicago at the hands of Megatron, shady government figures have found an excuse to target Transformers and hijack their tech.  The unlikely intervention of a failed inventor, Cade Yeager (Mark Wahlberg), and his discovery of the injured Optimus Prime set in motion a series of events that finds our heroes facing new foes.

Despite many subplots, Transformers: Age of Extinction lacks any emotional depth. Much of the plot is centered around Cade’s relationship with his daughter Tessa (Nicola Peltz). Cade is a hapless father who knows more about wiring electrical circuits than he does about parenting, but it doesn’t stop him from trying his best. Emotional friction is created between Cade and Tessa when her boyfriend Shane (Jack Reynor) comes into play. One would assume there is supposed to be some emotional friction in these subplots, but it comes mainly in the form of wooden acting, overacting,  poorly written banter, and contrived situations.

Bay and his team seem to miss the fact that these films are best when placed in the arena of wish fulfillment. The first half of the film is dark and pessimistic. When the film ventures away from its dark path, it’s hard to find joy in the short quips and bright shots. Optimus Prime and his posse are now filled with emotions not befitting of characters than normally occupy the high ground. Their rage and bitterness are off putting, even though the characters that pushed them to this edge are a cartoonish evil seen only in the most terrible of films.

Much of the story is moved forward by illogical plot points and a bag of tricks from Optimus Prime that has a deeper bottom than Mary Poppins’ bag.  There are multiple instances where Optimus Prime pulls a maneuver that would’ve saved a lot of trouble for him and his crew earlier in the film. Add in characters that change motivations at the drop of the hat, and one would surmise that multiple writers crapped all over this thing on its way to its final destination. Stuck on a plot point? No problem lets just give Optimus magic healing powers. Stuck on another plot point? Optimus now has a sword that can shoot down giant alien warships.

It’s very telling when a movie spends more time on its product placement than building unique and interesting characters. It’s hard to blame actors like Mark Wahlberg and Stanley Tucci when they are fighting for screen time with Bud Light, Oreo, Victoria Secrets, and presumably a company that specializes in cutoff shorts for women.  It’s blatant product placement that shows what the studio thinks of its audience. Their message to you as you stare at an in focus Bud Light truck on your local screen is, “Yeah, screw you. We put giant ads in this movie and didn’t even bother to hide them. It doesn’t matter, you’ll pay us to see it anyways.”

Many will read this review and assume that I’m an elitist scumbag critic who can’t turn off my brain for a moment in the sake of a fun few hours. I’d argue that films like these show that Hollywood is continually moving to a place where formula outweighs any other decision. This movie is everything wrong with filmmaking today. I’m all for fun at the box office.  This year has already brought numerous films like How to Train Your Dragon 2, Edge of Tomorrow, The Lego Movie, X-Men: Days of Future Past, and more that are easily accessible to all audiences – and without sacrificing their integrity. This movie assumes everyone planted in front of it is an idiot, and spoon feeds them every piece of plot. It’s lazy and one might even argue that it openly mocks its audience in one scene.

Does it matter?  Transformers will make boatloads of cash and continue to dumb itself down for parts 5 and 6.  Hollywood will continue to look for a franchise where they can recycle the same plot over and over and repeat the cycle. In the mean time good movies will still be made, many of which won’t make as much, but hopefully will stand the cultural test of time. We can only hope that Transformers: Age of Extinction is a film that quickly fades from the public consciousness.

I advise you to go use your money on better films that are already in theaters, but I know it isn’t easy taking my word. You’ll have fun moments in the film, but they’ll be overshadowed by twice as many terrible moments. Worst of all you’ll be proving the point that someone can do the bare minimum of story telling and you will still reward them with your money. You’ll confirm that you are just another stupid consumer who wants to be force fed product placement, air brushed skanks, and indecipherable action.

P.S. I don’t usually hate movies this often. So, I worked up a little shirt to show my contempt for Michael Bay. Let us know in the comments what you think.