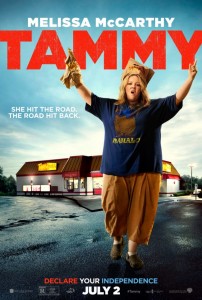 It seems like you either love or hate Melissa McCarthy. Her latest film, Tammy, will do nothing to change that. Tammy is a movie that looks like it is nothing special, just more of McCarthy’s raunchy act that she has been cashing in on since Bridesmaids. In reality, Tammy is a heartfelt, feel good comedy, mixed with some raunchiness.

Tammy is directed by McCarthy’s husband, Ben Falcone. Falcone and McCarthy co-wrote the film together. Falcone has a lot to learn about directing, as the films pacing leave a lot to be desired, but this film is all about girl power. We get McCarthy doing her usual schtick, as well as Susan Sarandon playing her alcoholic, free-spirited grandmother. Throw in Kathy Bates playing a lesbian, and what you get is a almost charming film when it’s all said and done.

The film picks up with Tammy, played by Mccarthy, having a rough day. First she hits a deer, then gets fired, and finally, returns home to her husband having dinner with another woman. After having her fill of the misfortunes of the day, she embarks upon a road with her grandmother to Niagra Falls.

Some of the funnier moments in the film include Tammy pulling off a robbery of a fast food place, and the banter back and forth between Sarandon and McCarthy. While McCarthy and Sarandon are the billed stars, I personally enjoyed Bates small role. Bates has a couple laugh out loud moments in her own right. Before the film can come to an end, Dan Aykroyd even shows up in a small role as Tammy’s father. Even with only a couple lines, Aykroyd’s character evokes laughter.

All in all, it’s not a perfect film, but Tammy is enjoyable. In a Summer that has been dominated by male-driven comedies, Neighbors and 22 Jump Street, Tammy is a bit refreshing and should leave you with a smile on your face in the end.

I will give Tammy a B.