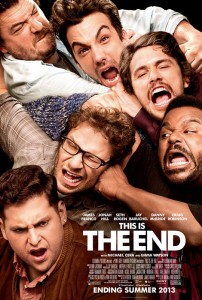 It shouldn’t be news to anyone that there is a new generation of comedians in the spotlight these days. While Adam Sandler, Chris Rock, David Spade are all still around – they don’t bring in the box office numbers like they used to. It started around 2004, when the Judd Apatow produced Anchorman hit theaters. Steve Carell, Paul Rudd and Seth Rogen all had parts, which carried over into Apatow’s hugely successful directorial debut in 2005 – The 40 Year Old Virgin. He then went two for two when Knocked Up was released in 2007, adding Jason Segel, Jay Baruchel, Jonah Hill, Craig Robinson and even an uncredited James Franco into the mix. From that point until present day, these have been our leading comedians. Most of them are good friends, and often appear in each other’s movies. So why not put 6 of them together in leading roles, and see what happens? Fast forward to 2013 where we get Seth Rogen and Evan Goldberg’s directorial debut – This is the End.

Jay Baruchel (played by himself, as all of the main characters are) doesn’t fit in with the rest of his friends who have adopted the Los Angeles lifestyle. He flies in from Canada to see longtime pal Seth Rogen, in hopes that the two of them can just hang out and catch up. But Seth has other plans, when he drags Jay to James Franco’s newly build house for a huge party. There they are joined by fellow “Freaks and Geeks” Jonah Hill, Craig Robinson and Danny McBride (who wasn’t even invited to the party). Jay feels out of place and asks Seth to walk with him to the store to get cigarettes. They start to hash out their feelings about their friendship and mutual acquaintances, when their trip is cut short by what appears to be a huge earthquake. But things get strange when huge blue beams of light come out of the sky, and start snatching people left and right. The two run back to Franco’s house, where everyone is oblivious to what is going on. Suddenly the earth begins to split into a giant sinkhole, and what they come to find as the apocalypse begins.

The film is packed with stars, with several current comedians showing up to be in their friends’ movie. Jason Segel, Michael Cera, Christopher Mintz-Plasse, Aziz Ansari, Paul Rudd, and Kevin Hart are all among the party-goers. Even Rihanna, Emma Watson and Channing Tatum show up to add to the laughs. While many of them are only in the beginning part of the film, it is fun playing “I Spy” and trying to pick out all of the celebrities at the party.

Watching the film, it is easy to see that the stars had a lot of fun while making the movie. But the problem with doing anything in a group of friends, without anyone outside to look at the project objectively, is that everything seems like gold. To the actors, one of which was the writer and director, I’m sure every show was a bulls-eye. Each joke probably appeared funnier than the last. Admittedly there were several laugh out loud moments throughout the film, but there were also many that fell flat. There is something to say about having too much of a good thing, and that is what can happen when you take a short film and try to stretch it into a feature. Jay and Seth Versus the Apocalypse was a good idea in 2007, but something just didn’t translate when converting it to a grand-scale.

Fans of the Apatow movies, along with pretty much anything Rogen and his friends show up in, shouldn’t be shocked by the crude language and subject matter. You pretty much know what you are getting into just by reading the credits, and if you aren’t a fan of their usual humor – you are in the wrong place. There is no shortage of penis jokes, f-bombs, or any other colorful topics in this one. With that being said, you wouldn’t have much of a movie without them.

I am a huge fan of films like Knocked Up, Superbad, Pineapple Express, and Your Highness. Take all of their stars and throw them together, and it seems like a recipe for success. I think what This is the End really suffers from is having too many leading men in the same room, and no one to play off of. All of the stars are big names, and can carry a comedy. But when you get too many of them going back and forth, it ends up being a little too much. If you are a fan of these comedians and most of their films, there is no doubt that there is plenty to laugh at. But don’t expect it to be an instant classic that you will be quoting for the next decade.