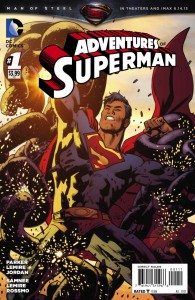 With this being the week of Superman, it seemed only natural that I give a little review of the newest DC Digital series Adventure of Superman.  The newest series in DC’s digital first series (Legends of the Dark Knight, Batman Beyond, and Smallville: Season 11 are a few of the others).  That means there are three stories that were released on the DC Comics app or through Comixology and then later released together in a single issue. Each story is has new set of creators who get the chance to tell their own Superman story that is not set in the current New 52 continuity.  It’s an amazing opportunity for Superman fans to see top talent that has never worked on a “Super” book before show off their skills while working on the original super-hero

In the first issue, we get to see stories from Jeff Parker (Thunderbolts and Dark Avengers) and Chris Samnee (Daredevil), Jeff Lemire (Sweet Tooth, Animal Man, and Green Arrow) who takes on both writing a drawing, and Justin Jordan (Strange Talent of Luther Strode & The Legend of Luther Strode) with art by Riley Rossmo (Proof and Green Wake). Not only does this breath new life into a comic legend that fallen out of DC’s number one spot, it also gives readers a chance to read a Superman story that isn’t bogged down by what’s happening in the current Superman comics. It gives the casual fan a degree of accessibility which is something that is missing.

The first story it titled “Violent Minds“. It is written by Jeff Parker and has art from Chis Samnee.  It’s a very simple story about Superman trying to stop a man in the middle of Metropolis who has developed some kind of telekinesis.  The problem being is that the man causing all the damage has no control of the power and he seems a little “off”.  After a quick fight with Superman, “Leon” (we learn that is the man’s name) drops dead of what looks to be an overdose.  At the end of the story, we learn that Lex Luthor was the one that created the “drug” Leon took as Les is always looking for a way to beat The Man of Steel.  Again, a very simple story, but in the hands of both Parker and Samee, the story turn into something great.

If the folks at DC don’t snatch up Jeff Parker and bring him into the Superman fold then they have the wrong people running things.  Parker absolutely nails the character.  He gets that Superman’s main purpose for putting on the blue tights and cape is to help people.  That comes across perfectly in the story.  He doesn’t want to hurt Leon, he just wants to help him.  Even after Leon makes Supes punch himself in the face.  It’s something that a lot of writers don’t really understand. There really is no direction in the current Superman books.  With any luck, Jeff Parker will make the jump to DC and breathe some new life into the Man of Steel. 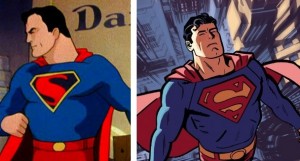 Parker’s story is only improved on my Chris Samnee’s amazing art.  The current Daredevil artist brings his retro style to Metropolis and it’s a perfect fit.  His Superman is exactly what I hoped it would be.  Samnee’s version of the character looks little like an updated version of the Superman from the Fleischer cartoons from the 1940’s.  When I think of Superman, this is the version I envision.  Maybe it’s because I’ve been missing a great artist doing Superman or maybe it’s because I’m partial the a home town guy getting to take on Superman, but Chris Samnee’s style is tailor made for a Superman title.