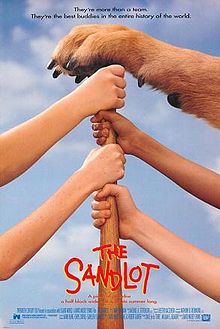 If you instantly recognized the movie just by the first name I mentioned, you may want to head to TASK Field tomorrow morning.

Working in conjunction with Cardinals Care and Fox Sports Midwest, 20th Century Fox is helping dedicate TASK (Team Activities for Special Kids) Field, a ballfield for disabled children. To help dedicate the field, Fox has enlisted the help of The Sandlot director David Mickey Evans and Patrick Renna, who portrayed Hamilton “Ham” Porter, the brash, trash-talking catcher. Evans and Renna are on a nationwide tour to promote the Blu-Ray release of the film, which coincides with the 20th anniversary of The Sandlot. Yes, that’s right. This movie is 20 years old, if you were feeling a little too young recently.

I had the chance to sit down and talk with Evans and Renna (more on this coming soon), and they are candid, easy-going, and hilarious. If you’re like me and grew up watching The Sandlot, here’s your chance to meet the driving forces behind the film.