It’s right around the midpoint that I became somewhat split on my opinion of the movie. While a good amount of jokes and funny scenes were experienced after the group discovers the secret of the townfolk, I was actually getting into the story of the group of friends reuniting and going on a pub craw and was almost disappointed when the film turned sci-fi. It’s not hard for people to see Gary and think of one or two people in their lives that may act like him, and watching the group go along for the ride was a pretty entertaining story.

Instead, the film turns into a British re-telling of The Body Snatchers. This isn’t necessarily a bad thing. The presentation is slick, and there are a lot of laughs to be had. It’s pretty obvious by this point that Edgar Wright, Pegg, and Frost have a lot of fun working together, and the chemistry is pretty hard to deny. If you’re going to redo someone’s work, you might as well do it well, and on this front, they succeed. 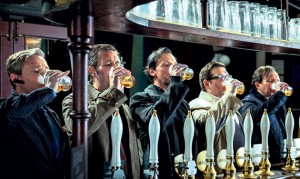 One clever point that I really liked was that the bar names tended to be hints for the story’s progression (i.e., the first pub they go to is The First Post, they meet up with Sam at The Old Familiar, etc.). Wright also pointed out that nine of the pub names are actual pubs, which really put The Famous Cock in a whole new light.

It’s not a perfect marvel of cinema, but it’s an entertaining summer flick with plenty of laughs if you appreciate British humor. While this may be the final part of the Cornetto trilogy, given the relatively large profit margins of the first two films (this is by far the most expensive production of the three, but is already well on its way to recouping its production budget), it’s not a stretch to assume Wright, Pegg, and Frost will be making more films in the future. While I’m curious to see whether they can make a “normal” comedy, you can’t go wrong at The World’s End.

The World’s End gets a B.