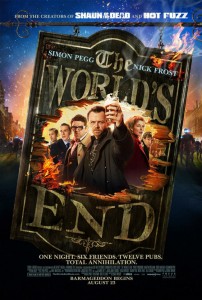 Let’s face it, we all have that one friend. The one who’s very hesitant to grow up, instead trying to live in the past, to the bewilderment of their friends, who’ve all landed successful careers and started families.

Hell, that might be me in my group of friends.

Regardless, there’s probably a very good chance you know someone exactly like I’m describing. Sometimes they find the motivation to change their ways; sometimes they don’t. Either way, at times it can be an excruciating process for their friends as they find their way.

Such is the journey of the friends of Gary King (Simon Pegg) in The World’s End, the final film in the Cornetto trilogy (the first two being Hot Fuzz and Shaun of the Dead). Trying to convince his friends to join him for a weekend to relive their high school glory days, King hopes to complete the Golden Mile, something the group tried and failed. The resulting journey is a film that seems to fall just short of greatness, but is an extremely funny journey nonetheless.

Twenty years after the group attempted The Golden Mile (a pub crawl consisting of 12 pubs in their hometown), King visits each of his friends to recruit them for one more attempt. He convinces Peter (Eddie Marsan),  Oliver (Martin Freeman), Steven (Paddy Considine), and Andrew (Nick Frost) to join him.

The group gets through the first few pubs without incident (with Gary rushing them through) before Gary gets into a fight with a local teenager, who turns out to be a robot. Eventually, his group of friends must fight the teenager’s group of friends. Gary and Co. survive, but instead of running to the authorities, they reason they must continue on their pub crawl, otherwise people might become suspicious of what happened.

As a sidestory, Oliver’s sister Sam (Rosamund Pike) meets up with the group. While Gary had a previous sexual liaison with her, Steven obviously has feelings for her, which progress throughout the film. As the group goes from pub to pub, they learn that nearly everyone in the town has been replaced by alien doppelgangers and fight to discover the truth.