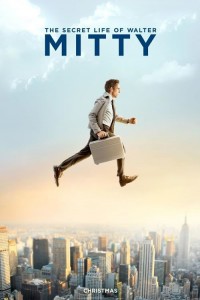 Having read the short story “The Secret Life of Walter Mitty” several years ago, I had a good idea of how the story would go in Ben Stiller’s latest offering. That being said, I can’t say that I hated the movie, but I can’t say that I really liked it either. The film, directed, produced, and starring Stiller features some great music and at times beautiful scenery, but eventually falls flat due to lack of comedy and just plain boringness.

Stiller, who can be quite funny when he wants to be, opts for a toned-down, more-serious role in this film. Mitty works in the basement of Time Magazine, and has been there for 16 years, going largely unnoticed, not just at his job, but also in his personal life. He’s a shell of a man, frequently distracted by episodes of daydreaming. He is responsible for his relocating his mother (Shirley Maclaine) to an expensive apartment, while his sister, played by Kathryn Hahn, is busy acting in a second-rate version of Grease.

Mitty spends his days daydreaming of meeting his love-interest played by Kristen Wiig. From saving her three-legged dog from a burning building to growing old with her in a funny “Benajmin Button” gag that seemed out of place with the conservative tone of the entire movie. After learning of the companies downsizing from new boss Ted, lazily played by Adam Scott, Mitty is faced with developing the photo that will grace Life’s final cover. The problem is that the photo has been lost and Mitty embarks on a journey to find the photographer Sean O’ Connell played by Sean Penn. Penn’s performance, while brief is a major part of the film, and really the only solid role in the film. Mitty’s journey will take him to Greenland, Iceland, and Afghanistan in search of Penn’s character. It’s on the journey that Mitty starts to find himself and realize that he is not as boring and lame as he thought he was.

The film, which is based James Thurber’s 1939 short-story, is ultimately done in by its’ deflating and depressing story. For a movie that comes out around the holidays, it sure is a mood killer. As stated before, the saving grace of Mitty is Sean Penn and some of the scenery of the film is truly beautiful. From scenes in Iceland and Greenland, to a scene where Penn’s character is trying to shoot a rare animal in Afghanistan, Stiller proves he has a knack for bringing beauty to the big screen. Unfortunately, the rest of the story is bogged down and seems forced. In a time of year where people want to be entertained and laugh, this is not a movie that fits in with the trend. While not terrible, I could sure think of films’ that would be more enjoyable during the holiday season.

The Secret Life of Walter Mitty gets a C-.