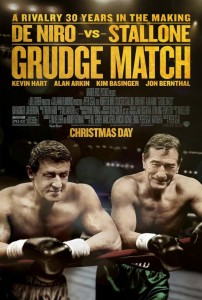 Going into the film Grudge Match, my expectations weren’t very high. The latest offering from director Peter Segal not only exceeded my expectations, it knocked them out of the ring.

The premise of the film revolves around Henry ‘Razor’ Sharp(Stallone), a retired boxer and Billy ‘The Kid’ McDonnen(DeNiro), also retired, and their ongoing 30 year feud. The two faced off in two high profile bouts three decades earlier, only to have Sharp retire right before their third and big money rematch to settle the score. In the film, both retired fighters, now in their 60s have fallen on hard times. Sharp works at a steel plant, but is laid off, while McDonnen, running a car dealership, spends most of his time drinking and reliving old glory days. The pair are reunited by promoter Dante Slate, Jr.(Hart), after they are scheduled to appear in an Xbox boxing game. The two engage in a humorous fight on the set of the video game, which is secretly filmed on a cell phone. The fight goes viral, starting a push for the fight between the two washed up fighters.

What makes the movie work in part is the fact that both DeNiro and Stallone made their names for roles in famous boxing films, Stallone in “Rocky” and DeNiro in “Raging Bull.” In one particular scene which is quite humorous, it appears that Stallone’s character is about to resurrect the iconic scene from “Rocky” where the boxer trains in a meat packing plant, however his trainer, played by Arkin stops him. Arkin really steals the show in the film. His endless jokes and banter with Stallone and Hart in particular keep the movie moving in lighthearted fashion. The movie works on several levels and does well in appealing to audiences of all ages, while older movie goers will have more of an appreciation for many of the numerous Balboa/LaMotta jabs.

While Stallone and DeNiro alone could not carry the comedic portion of the film, Hart and Arkin deliver solidly. The two are hilarious at delivering comedic punches at each other, and put the film on another level. I can’t say enough about the performance of Arkin. His performance alone makes the movie worth seeing. Bassinger also delivers the goods as a former love interest of both fighters. While not just a movie about boxing or a comedy, “Grudge Match” also hits a homerun in the sentimental department. The backstory of McDonnen and his son is at times touching.

While enjoyable, the film is not without faults, as Stallone and DeNiro’s banter back and fourth sometimes runs a bit long. The finale of the film comes up a bit short as well, as I felt I would have rather seen the two stars square off 30 years ago rather than now. However, all in all I think “Grudge Match” was a perfectly entertaining movie. It will not win any awards, but it’s a fun way to spend two hours. Make sure to stick around during the credits for a few extra funny scenes.

Grudge Match gets a B+.