The Dictator is Sacha Baron Cohen’s first departure from taking one of his well known characters from The Ali G Show to the big screen. And unlike Borat and Bruno, his latest endeavor is not a faux documentary – but rather an actual scripted comedy like his first film Ali G InDaHouse. Depending on how you look at it, this could either be a good thing or a bad thing. 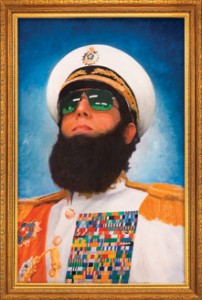 Sacha Baron Cohen as 'The Dictator'

Admiral General Aladeen (Sacha Baron Cohen) is the dictator of Wadiya, a fictional country in north Africa. Aladeen is a firm ruler, who wants to make sure that not even the smallest notion of Democracy makes it’s way into his country. While travelling to New York, he is double-crossed by his uncle Tamir (Ben Kingsley) who is heir to the Wadiyan throne. Fortunately for Aladeen, the assassination attempt on his life goes bad, and he is left only beardless and unrecognizable. But this proves to be a problem as he cannot get back into his hotel with his people, and finds he has been replaced by an idiotic body double who will do Tamir’s bidding. His only hope is to blend in while he figures out how to reclaim his throne, while getting the help of an organic grocery store owner named Zoey (Anna Faris) and an old friend – Wadiya’s former head of weapons, Nadal (Jason Mantzoukas).

Many people that I have spoken with about Sacha Baron Cohen’s films have told me that they are tired of the man-on-street, real-life interview comedy that we saw with Borat and Bruno. I personally thought that those two films were great, and wouldn’t mind seeing a little more. But I understand how with their popularity and Baron Cohen’s notoriety that it would be hard to pull them off again. So for The Dictator, the filmmaker switched from arranging interviews to a real script. And although the film loses a bit of the shock factor this way, it is surprising how well it still manages to be clever and offensive.

The soundtrack for the film is great, and really sets the scene throughout the film. It features Arabic versions of “The Next Episode,” “Everybody Hurts,” “9 to 5,” and “Let’s Get It On” which are perfect for showing Aladeen’s transition from Wadiya to America. The choice of songs is great, and you can’t help but to laugh as they come on just at the perfect time.

Let’s not kid ourselves, the film is pretty stupid to be perfectly honest. But if you are going into it expecting anything different, you probably aren’t going to see the right movie. The film is actually quite political at times, and is clever how it does so in such a sneaky way. Sacha Baron Cohen uses his unique sense of humor to poke fun at dictators, politicians, and everyone in-between. And seeing as so many people he makes fun of do stupid things, maybe his offensive, slap-stick sense of humor is perfect for the job.

Some of the jokes in The Dictator are downright hilarious; others are just plain bad. It’s hit or miss, but you have to give Sacha Baron Cohen credit for doing something different and being pretty clever about it. I think at certain times throughout the film the jokes went over the audience’s heads. So where they are hilarious if you get them, they aren’t always accessible to everyone. But there were plenty of occasions throughout the entire film where you just can’t help but to laugh out loud.

The Dictator is definitely not for everyone. But by now most people should be familiar with Sacha Baron Cohen’s outrageousness and offensive style of humor. If you like The Ali G Show, Borat and Bruno – chances are you will enjoy his latest endeavor. Although many of the jokes fall flat, the ones that hit the target get a bull’s-eye. And perhaps this is the kind of film that will actually get better upon repeat viewings.

The Dictator is a C+